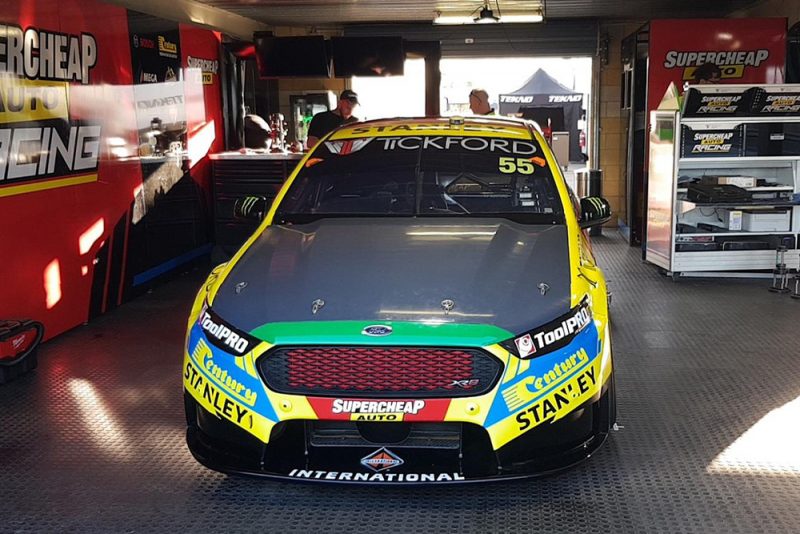 Ford teams have been working to implement new roofs and bonnets to their cars after Supercars cleared the use of lighter composite panels.

Nissan teams have also been allowed to replace their roofs, while Scott Sinclair told Speedcafe.com that the team is also looking at composite boot fascias and driver’s doors.

The push for the use of composite panels from the Ford and Nissan teams comes following the launch of the Holden ZB Commodore, which uses them extensively.

But while public discussion has centred on the performance improvements the lighter weight panels offer, Edwards believes their implementation brings other benefits, including reduced costs for teams.

“There’s three reasons why we’re doing it, and everybody’s been focusing on one reason, which whenever it comes down to performance that’s always the most topical discussion,” Edwards told Speedcafe.com.

“Not many people are actually interested in the repairability or the supply side of it. It’s not as much of a sexy story.”

According to Edwards, key among the attractions surrounding the use of composites is the ease of repairs it allows, which drives down costs longer term.

Teams have employed composite components for a number of years, a practice which Edwards believes has saved his team a significant amount of money.

“We changed to composite front and rear guards, front guards, three-quarter panels, at a guess, eight maybe even 10 years ago. It was quite a long time ago,” he explained.

“Overnight it saved us a fortunate because the steel panel, the slightest little touch and it’s the way they drive these cars, you are touching, leaning, scraping walls, with a steel panel it just doesn’t absorb anything.

“Those (composite) guards and rear quarters are just so durable that even when you do happen to have a bit of an altercation, nine times out of 10, you repair them.

“It doesn’t take long before you’re saving money,” he added.

Supply of parts is another consideration, and was the key reason Supercars approved the use of composites in the ZB Commodore’s homologation.

For Tickford, the supply of some components is beginning to become more difficult, with stockpiles of spares beginning to run low.

“Ford looked after us prior to them closing down the stamping plates in Geelong when they produced lots of bonnets and boots and things for us back then.

“But what seemed like a lot of panels in October 2016 is now looking like a very, very small pile of panels.

“Part of it is to do with the supply, exactly the same as the Commodore.”

Tickford Racing heads to Symmons Plains with more composite components for its four car fleet, having had some panels on all cars at the Grand Prix two weeks ago.

However, not all cars have all components.

“There’s more of the cars that have now got composite panels than we had at the Grand Prix,” Edwards admitted.

“Essentially all four cars had one piece of the pie on their car at the Grand Prix, they were all sort of equal as such.

“We’re trying to share it out as much as we can but most of them are now got the full what is our current package on them.

“But our production doesn’t stop while we’re at the Grand Prix.

“Whilst we were there our production guys were frantically making parts for Tasmania and we’re fortunate in that we came out of the Grand Prix with minimal damage, so that certainly helps.”

This weekend the team will be racing without team manager Chris O’Toole, who suffered a broken leg in a motorcycle accident and is set to miss his first event since 2003.

O’Toole was originally part of the Glenn Seton Racing team before staying with the outfit as it became what is today Tickford Racing.