No concerns over potential repeat of 2017 red flag confusion

No concerns over potential repeat of 2017 red flag confusion 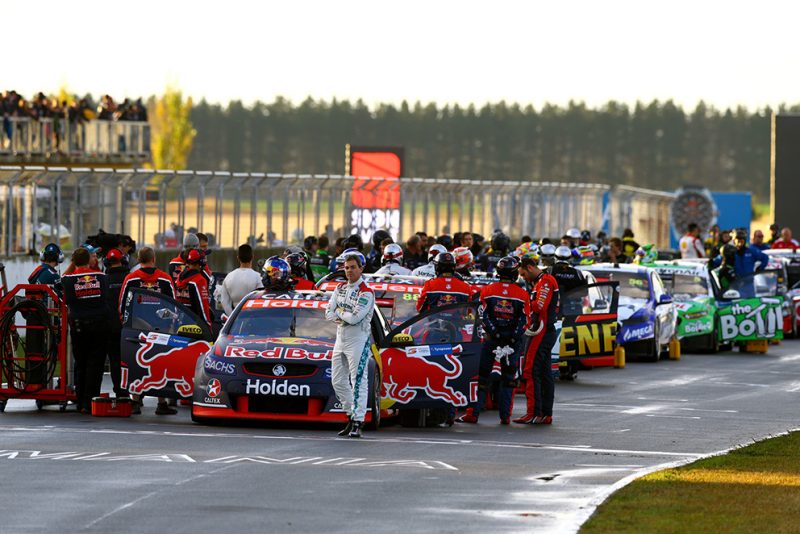 Supercars team bosses are confident that there will not be a repeat of last year’s Symmons Plains red flag confusion should a similar event reoccur despite no major changes to regulations.

It is believed that a force majeure provision would be used to cover any such scenarios if indeed a race is restarted in the first place.

The 2017 Tyrepower Tasmania SuperSprint was marked by controversy when Saturday’s race was red flagged on Lap 2 for a major crash which left 12 cars strewn on the track.

After a lengthy clean-up, the race was restarted with only enough time for the 15 surviving cars to complete one full lap under Safety Car before taking the chequered flag.

While the Supercars Operations Manual makes provision for races which are suspended and do not restart, there is no regulation concerning a scenario where the race does restart.

In the 2017 case, the leader and each of the other finishers completed only four of the scheduled 50 laps, well short of the 50 percent threshold for championship points to be awarded (in full) had the race not restarted.

The matter was ultimately resolved by stewards invoking an “exceptional circumstances” clause within the Operations Manual which allows regulations to be overridden in the event of force majeure.

While the results of the race stand in the record books, including Shane van Gisbergen’s status as the official race winner, they ultimately did not count towards the championship standings.

Speedcafe.com understands that championship points were never officially awarded, with a decision made before the race results passed to the Final Classification stage.

Despite an overhaul of the rulebook ahead of the 2018 season, there is still no explicit regulatory provision for championship points to not be awarded should a suspended race restart and cars take the chequered flag before the leader has reached 50 percent scheduled distance.

However, a number of team bosses contacted by Speedcafe.com all believed that the force majeure provision is adequate should a similar scenario occur in future.

“Fundamentally what they’ve done is made it clearer that the stewards have the ability to make a call under force majeure,” Nissan Motorsport team manager Scott Sinclair told Speedcafe.com.

“That’s what all the conjecture from our perspective came up from last year.

“Fundamentally the stewards can do whatever they deem necessary, which we’re in agreement with because there are these cases where you’re never going to be able to put (a provision) into a rulebook.

“The conclusion they came to last year was the right one, it was just that it was a little bit unclear and also at the time we thought it maybe wasn’t as clear.”

“It’s a very tricky subject, and a lot of discussion has gone into that. It’s better than it was,” he told Speedcafe.com.

“Is it perfect? Maybe not, but the fact is for every scenario you come up with you can come up with an alternate scenario where the change you’re proposing might work against what you’re trying to achieve.

“If the exact same situation happened, I think both CAMS and Supercars have got a better idea on how they would handle it.”

The Virgin Australia Supercars Championship is first on track at Symmons Plains for Practice 1 on Friday at 1130 local time/AEST.

The relevant sections of the 2018 Supercars Operations Manual

Division A: A9.2 Stewards

9.2.4 Stewards are vested with a general power and authority to:

9.2.4.3 Pursuant to the Rules or in exceptional circumstances vary the Rules and any other regulations, however described, for reasons of safety or in the event of force majeure;

14.1.3 If a race is suspended before 50 percent of the scheduled race distance has been completed by the leading Car and cannot be resumed, no points will be awarded.

14.1.4 If a race is suspended after more than 50 percent of the scheduled race distance has been completed by the leading Car and cannot be resumed, full points will be awarded.