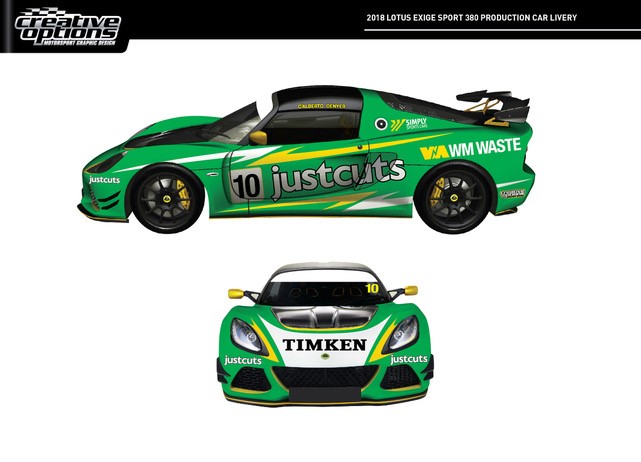 A brand new Exige has been entered by Lotus’ Australian importer Simply Sports Cars for the pair to drive the full five-round season, which kicks off mid-May at Sandown.

They will race for outright honours in Class A1 and are set to be among three to four Exige entries on the grid.

“As well as the #10 (Denyer/D’Alberto) which we are running ourselves we are also currently building two others for customers who plan to also run the entire APC season.

“On top of that, we have also just sold another that is likely to contest the second-half of the 2018 APC season.

“The series is a really great fit for the Exige, allowing us to compete with similar-priced cars in the market place, and we are very excited to see how the season unfolds.

“We think the car will be competitive across the course of the season. The tracks with flowing corners will suit us, whilst we won’t be as strong at tracks with 90-degree corners and long straights.

“Sandown falls into that latter category, so we may struggle against some of the higher horsepower cars at that first outing.

“The car is a simple one though so unlike some of our opposition, we don’t have any complicated electrical systems and we expect it to be very reliable.”

Denyer broke his coccyx in a rally crash in March last year before making his competitive return to racing in Australian GT in August, and driving a MARC Car in this year’s Bathurst 12 Hour.

He and D’Alberto have previously been race winners together in a Maranello Motorsport Ferrari in the 2015 Australian GT Championship at Sandown.

Lotus will have a heavy presence at the final round at Phillip Island in November, which APC is running itself, with plans for approximately 70 Lotuses to run as a support category.

“We will have around 70 Lotus customers at Phillip Island with their cars, taking part in a Lotus Only Sprint which will be an official support category for the APC-run event,” added O’Connor.

“We will also be supplying the pace car for that weekend and will be entertaining guests in a number of corporate hospitality suites over the weekend.”

Round 1 of APC takes place with Shannons Nationals at Sandown from May 11-13.