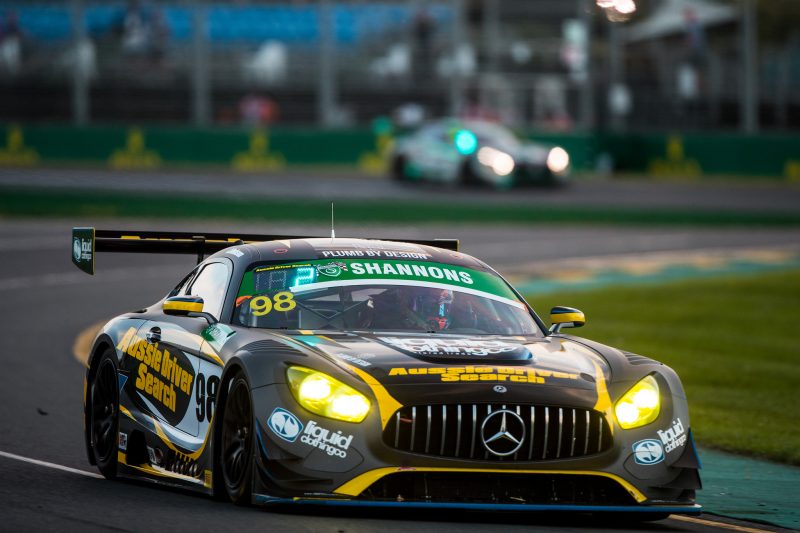 David Reynolds will drive a Mercedes-AMG GT3 in the three Australian Endurance Championship races during this year’s Australian GT season.

Reynolds will race with Jaie Robson in the Aussie Driver Search entry for the first time at The Bend Motorsport Park’s first race meeting on April 13-15.

The drive came about at the suggestion of car owner Mark Griffith, with Reynolds having driven a Griffith Mercedes-AMG in the last two runnings of the Bathurst 12 Hour.

Robson meanwhile enjoyed a remarkable Australian GT debut at Albert Park when he won both the Am driver races and finished eighth in each of the two Pro driver races, in a field which includes the likes of Craig Baird, 24 Hours of Le Mans winner Marcel Fassler, and Formula 1 race winner Giancarlo Fisichella.

He and Reynolds are piloting a near band new chassis which first saw action at the Australian Grand Prix after the Bathurst 12 Hour car was written off in the race-ending crash at McPhillamy Park.

“I’ve driven that (model of) car a few times and know it pretty well, and Jaie seems like a pretty fast young kid.

“He did really good at the Grand Prix and he’s never driven there before and he won his races there.”

Robson said, “I think it’s going to shortcut a lot of learning and also show a comparison of how far I am off him.

“He’s got a lot of experience and to have him onboard, I can’t wait. It’s going to be awesome.”

The signing means that Reynolds will also drive the Mercedes at the Phillip Island 101 in June and Hampton Downs 101 in October.

However, the 32-year-old says that he would also be keen to take part in overseas sportscar races, including any opportunities which would arise should his Supercars team Erebus Motorsport follow through on talks to return to the GT3 arena and compete overseas.

“I’d love to, that’d be so much fun,” said Reynolds of the idea of racing GTs overseas.

“It’s pretty hard to get a start over there unless you know someone or you ring around but I’d love to do that stuff.

“Erebus was, before it was a V8 team, a pretty good GT team, and they always have aspirations of doing other things as well.

“I’d put my hand and say I’d love to do it (race a GT3 with Erebus); whether they take me or not’s a different thing,” he mused.

“I’d love to do something at some of the coolest race tracks around the world, like Spa 24 Hours, Nurburgring, wicked tracks you could go to and have a lot of experience and something you’d never do in your life again.”

Reynolds will be behind the wheel of his regular ride, the Penrite ZB Commodore, this weekend at the Tyrepower Tasmania SuperSprint at Symmons Plains Raceway.

Previous Story Erebus to run own badges at Symmons Plains