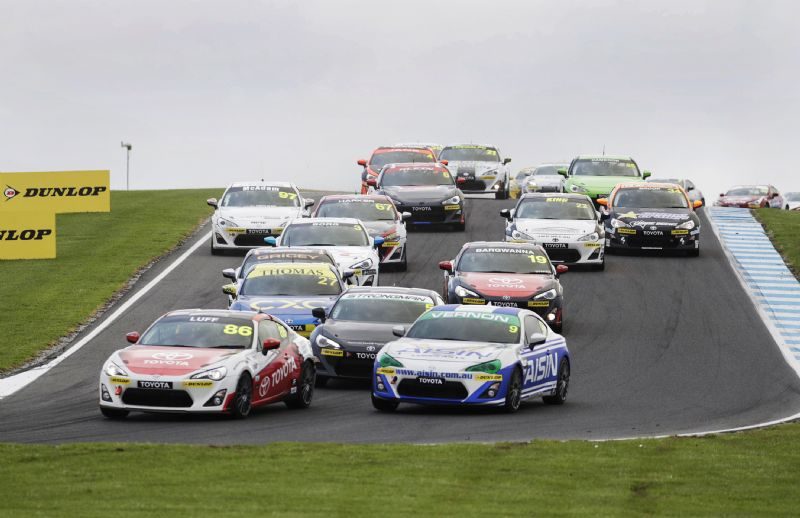 The Toyota 86 Racing Series will again start at Phillip Island

The Toyota 86 Racing Series has announced an expansion in incentives for 2018 including a session with Mark Larkham for the most improved driver.

Prizemoney for this year’s series has been increased to a total of $150,000 with the top eight series finishers now being financially rewarded.

The ‘Kaizen Award’ for continuous improvement now includes a session at the Mark Larkham Training Academy in addition to a fully funded trip to enter a round of New Zealand’s Toyota 86 Championship, with Toyota now valuing the total package at $35,000.

Toyota’s vice president of sales and marketing Sean Hanley said that the Toyota 86 Racing Series has proven itself as a genuine motorsport pathway.

“The Toyota 86 Racing Series was created as an affordable, grassroots racing series to foster new talent. Looking at the series alumni after just two years, it has already proved its worth,” he said.

“Inaugural series winner Will Brown is a perfect example, claiming back-to-back class victories in the Bathurst 12 Hour and recently winning the Peter Brock Medal for combining outstanding driving ability with a sportsman-like attitude.

“The 2017 series winner Jimmy Vernon and rival Cameron Hill, who has the most series victories to date, are both stepping up to GT series drives in 2018.

“The Toyota 86 Racing Series offers impressive rewards and provides the opportunity for all entrants to showcase their talents on the national stage.”

Vernon will enter the Porsche Michelin GT3 Cup Challenge with McElrea Racing, while Hill has moved into Porsche Wilson Security Carrera Cup Australia, though the rest of his season is in doubt after a crash at the Australian Grand Prix.

Next Story Toyota locks in 86 Racing Series until 2020