SuperUtes capable of ‘another 100bhp’

SuperUtes capable of ‘another 100bhp’ 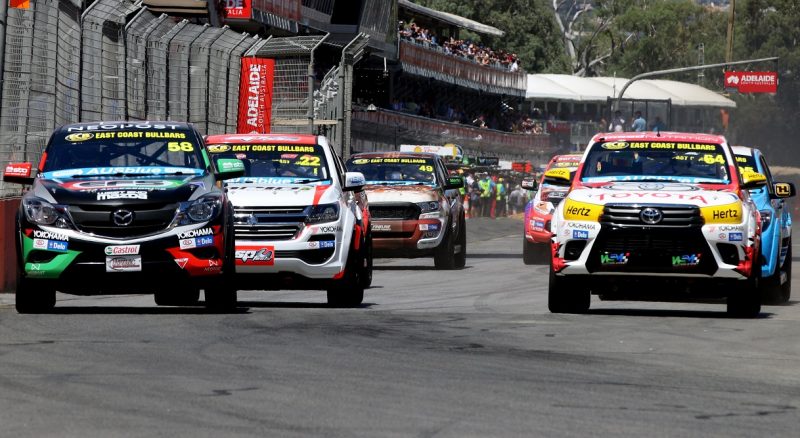 The performance of the SuperUtes is set to improve pic: Matthew Paul Photography

The performance of the current SuperUtes field could improve by ‘another 100bhp’ once teams come to grips with the new machinery.

Making its debut at the Adelaide 500 last month, performance has been set at a level that allows teams to learn their cars stressing them to the limit in terms of performance.

As teams gain further data on the cars, performance could be significantly increased.

“All these cars are capable of another 100bhp,” Sieders Racing Team boss Luke Sieders told Speedcafe.com.

“You’ve just got to go about it the right way so you don’t chuck a box of bolts down the track and ruin the spectacle that way.

“The limiting factor is not detonating cars, (if) you know what I mean.

“I think once the teams get their head around how to keep these things in their (operating) window, then (engine builder) Craig Hasted and the guys can start leaning on the power a bit more; it’ll be a pretty good package.

Limited running prior to the opening round saw a number of issues, primarily surrounding the cooling systems.

Most of those issues have been resolved, with teams holding their hands up in many instances as they continue to get to grips with the nuances of the turbo diesel SuperUte.

A two-day test at Winton later this month provides an opportunity for teams and drivers to increase their knowledge.

According to Sieders, there is swathes of time to be found by the drivers, while teams have yet to fully explore setup to unlock the car’s full potential.

“As it goes there’ll be considerable time in the car from what we have already,”Sieders explained.

“It’s like anything, when you’re developing a new product and a new series and stuff like that, you’ve got to be a little bit cautious with how you approach it and not throw all your eggs in the basket.

“You’ve got to make sure you go through it systematically and do it the right way.

“Supercars and the guys running the series have got an approach that, for me at the moment, I think it’s the best approach forward for the series.

“I think Year 2 especially is going to be significantly quicker than what we are now.

“There’s a couple of factors that’s limiting us at the moment; obviously horsepower, there’s a lot in the pipelines on the horsepower side of it to be sorted but the other side of it is the tyre.”

SuperUtes currently run on a road spec Yokohama tyre, though series officials have confirmed plans to look at upgrading to an R-Spec tyre for 2019.

Round 2 of the ECB SuperUtes Series takes place at Winton in mid-May, after a two-day test at the circuit on April 12-13.