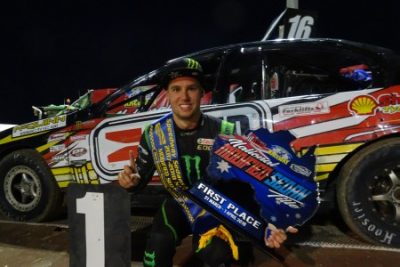 Waters led for the majority of the 40-lap final at Blue Ribbon Raceway, having also enjoyed an impressive run in practice and the preliminaries.

The Tickford Racing driver started the final in sixth but quickly moved up to third before the race was neutralised for an incident.

Waters took over second position shortly after the restart but his first pass for the lead on Lap 15 was to no avail as it took place moments before another Caution.

With the order reset and racing underway again, he took the lead for good a lap later and gradually pulled away.

Despite the field being bunched for Cautions four more times before the end, Waters held his nerve to take victory over Kye Walters, race leader for most of the first 16 laps, and Aidan Raymont.

The 23-year-old, who broke an eight-year-old track record during the A Main, now sets his sights on this weekend’s Tyrepower Tasmania SuperSprint (April 6-8).