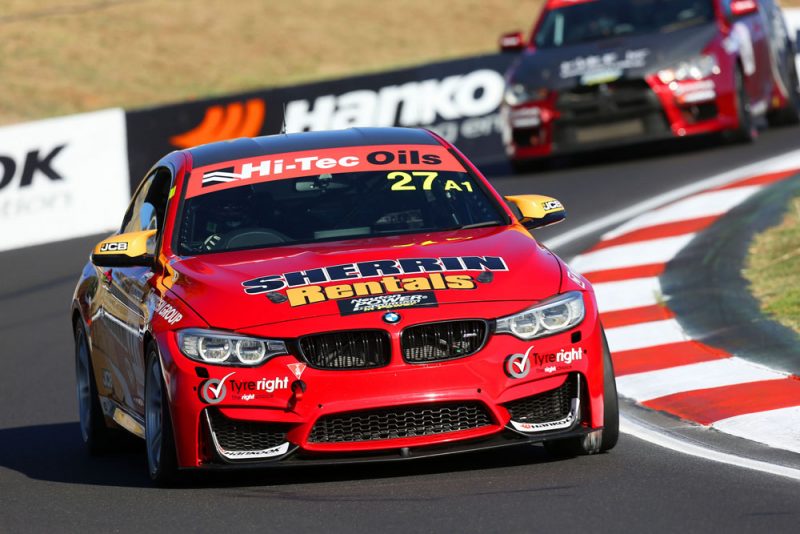 Brothers Grant and Iain Sherrin have won the Hi-Tec Oils Bathurst 6 Hour after a nail-biting three-way battle for the lead in the final minutes.

Grant Sherrin moved into the lead at the start of the 107th lap, using the extra power of his BMW M4 to extend a small but comfortable advantage to the line two laps later over Brett Strom.

With eight minutes left in the six hour race, Steve Johnson went around the outside of Strom at The Chase, the duo then running wheel to wheel for the lead going into Murray’s Corner.

Their battling allowed Sherrin to close, who promptly picked his way through to second heading up Mountain Straight on the 106th lap.

He quickly closed on Johnson, who defended into the final corner, only to lose out on the approach to Hell Corner as Sherrin seized the inside line.

The power of the BMW up the hill saw the new leader edge clear, Johnson left with no answer in pursuit of the M4 which went on to claim victory.

Johnson then came under the attention of Strom, losing out as he was forced to lift approaching The Cutting due to traffic.

It allowed the Strom in the BMW M Coupe to take the initiative, moving through into second place on the final lap.

Beric Lynton, leading at the time with Sherrin buried in the pack, lost a wheel when the studs sheered off the right rear of the BMW M3 with less than 20 minutes left on the clock.

It saw Lynton stop the car just over Skyline, the wheel itself rolling down the Mountain to Forrest’s Elbow and drawing a crucial final Safety Car.

Racing had only just resumed following another Safety Car, the 10th for a day, for a car coming to a halt on the approach to The Cutting.

The Safety Car for Lynton was a benefit to the Sherrin BMW, which looked to have fallen out of contention after picking up a drive through penalty inside the last hour.

Sherrin served the penalty with 40 minutes remaining, but trailed the field by some half a lap before the final Safety Car, setting up the dramatic finale.

Karl Begg and Justin Anthony won the A2 Class in the Mercedes-Benz C63, a lap behind the overall winners and one place ahead of the A1 Class car of Garth Walden and Craig Baird Mercedes-AMG A45.

The Walden/Baird combination had been in contention for much of the race until a coil issue dropped them off the lead lap.

B2 Class went to the Holden VF Commodore SS of Joe Krinelos, Tony Virag, and Brett Howard, 10th overall and one place ahead of B1 Class winners Scott Gore, Keith Bensley, and Patrick Galang.

In Class D David Baker steered the Honda Integra Type R he shared with Matthew Windsor and Brian Callaghan to the class win, while Class E changed hands almost within sight of the flag.

Father and daughter combination Mark and Amy Griffith headed the field in their Toyota Echo before late dramas saw them take to the lane on the penultimate lap of the race.

It saw them fall behind Andrew McMaster, David Noble, and David Worrell in their Mazda 3.

It marked the maiden Bathurst 6 Hour win for the Sherrin brothers, who last year won the Australian Production Car series.