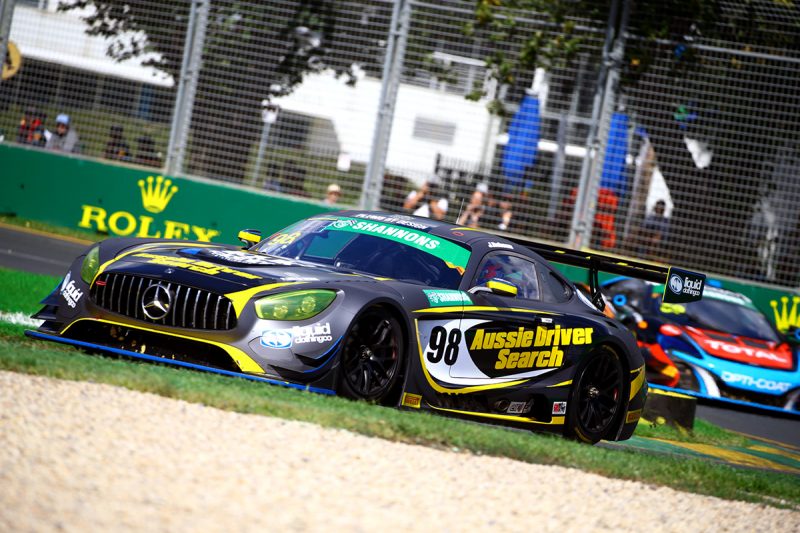 Jaie Robson says that he still hasn’t fully taken in his achievement of winning two races and the round in his first start in the Australian GT Championship at Albert Park.

Robson, fresh out of a season and a half in Aussie Racing Cars and with no prior competitive GT3 driving, won both of the Am driver races.

The 24-year-old also finished eighth in both Pro driver races, behind the likes of Craig Baird, Marcel Fassler, Giancarlo Fisichella, and John Martin.

His exploits in Race 2 were particularly entertaining, pulling off a second of two bold attempts to pass leader Fraser Ross and win by nearly six seconds.

Robson tested a GT3 Lamborghini in August last year but had not even sat in the Griffith Corporation-prepared Mercedes-AMG GT3 he raced in Melbourne until the night prior for a seat fitting.

“Indescribable, unbelievable,” Robson said of his weekend at the Australian Grand Prix.

“I went into that weekend thinking top 20, maybe top 15, and then to actually win the thing, I still haven’t taken it in yet.

“I hadn’t driven the car and I think I exceeded a few people’s expectations. It was the best win in the best place I’ve ever been to.”

Robson appeared on the national scene in mid-2016 having earned a drive in Aussie Racing Cars through the Aussie Driver Search program.

Aside from a handful of New South Wales Pulsar Championship rounds and three races in a GT4 Ginetta including this year’s Bathurst 12 Hour, he had no other circuit racing experience.

The Sydneysider says that he hopes to use Australian GT as a launchpad to eventual racing overseas.

“I did karting when I was younger but we didn’t have the budget and stuff and that’s why I did Aussie Driver Search and the Pulsar series, just because it was cheap and I wanted to see how I went,” said Robson.

“I got poles and wins, and that’s why I wanted to do the Aussie Driver Search and it just gave me the opportunity to race a car alongside Supercars and everything’s escalated pretty quickly from that.

“I want to race overseas, not just here in Australia, so I’ve come to see what’s onboard.

“It’s a juggling act the whole time of what we want to do (due to budgets) but at the moment I’ll be sticking with Australian GT and see what comes about, see what happens, and go from there.”

Robson is set to take on the full Australian GT Championship in the ADS/Liquid Clothing Mercedes-AMG, which moves into endurance mode for the next round at The Bend Motorsport Park on April 13-15.