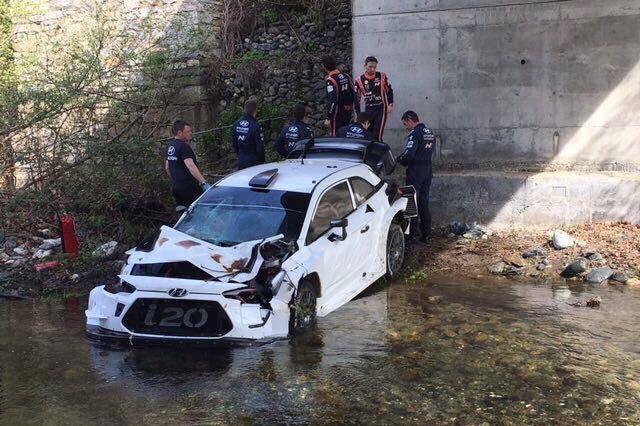 Thierry Neuville has crashed his Hyundai i20 WRC into a river during testing for next week’s Tour de Corse.

Neuville was conducting running on the French island of Corsica, which will host Round 4 of the World Rally Championship, when he left the road approaching to a bridge.

According to WRC.com, the accident occurred at the exit of a left-hand corner where the Belgian slid off the road and dropped more than five metres into a shallow section of the river.

While the car incurred significant front and rear damage, Hyundai has confirmed that neither Neuville nor co-driver Nicolas Gilsoul were injured.

Sordo will be piloting the #6 i20 for the second of four rallies in a row before Hayden Paddon is back behind the wheel for Rally Italy in June.

Neuville is second in the championship, which resumes on April 5-8.

We can confirm that @thierryneuville and @nicolasgilsoul went off the road during the final afternoon of our three-day #TourdeCorse test today. The crew are OK. #HMSGOfficial #WRC