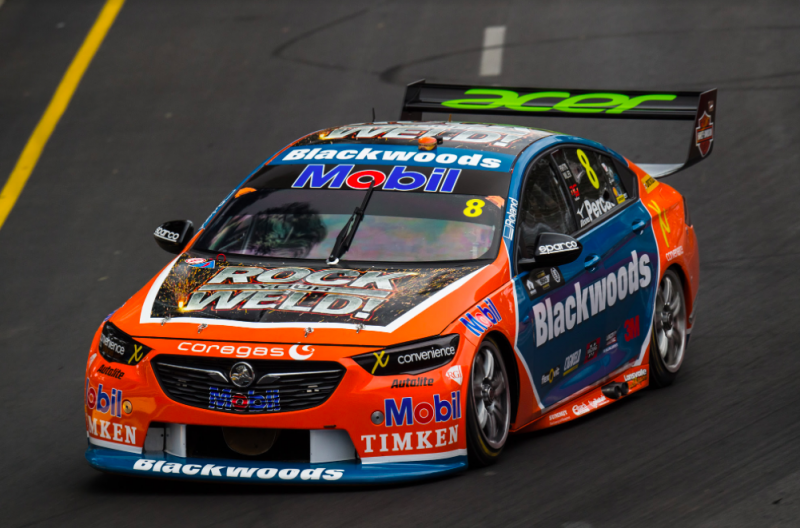 Nick Percat will run under the colours of Blackwoods at the Tyrepower Tasmania SuperSprint next weekend.

The industrial tools and safety gear provider has stepped up its support on the #8 Brad Jones Racing entry after securing title sponsorship for the season opening Adelaide 500.

As a result, the striking orange and blue livery run at Adelaide will return for the visit to Symmons Plains from April 6-8.

Percat heads to Tasmainia off the back of his most complete weekend in Supercars after scoring four top 10 finish and back-to-back podiums at the Coates Hire Supercars Melbourne 400.

The South Australian ran with title sponsorship from mattress supplier Tempur at the Albert Park meeting.

“We head to Symmons Plains with a nice boost of confidence after the last couple of events,” said Percat.

“Getting the podium results in Melbourne has been such a great reward for the team and all the efforts they’ve put in over the last couple of months.

“Everyone has been working incredibly hard to get to this point and the car is awesome.

“BJR have traditionally been strong in Tasmania. It’s one of those circuits where the car needs to be perfect.

“You’ve only got a couple of corners to work with, so you need to get it right every time. It’s not like other tracks where you can try make up a little ground elsewhere if need be.

“There’s no room for error and no room to hide here.

“The results always show that, generally its only eight or so tenths between first and last here, so qualifying well here will be a big focus for us.”

Percat is lying eighth the championship standings ahead of Round 3 of the Supercars Championship.