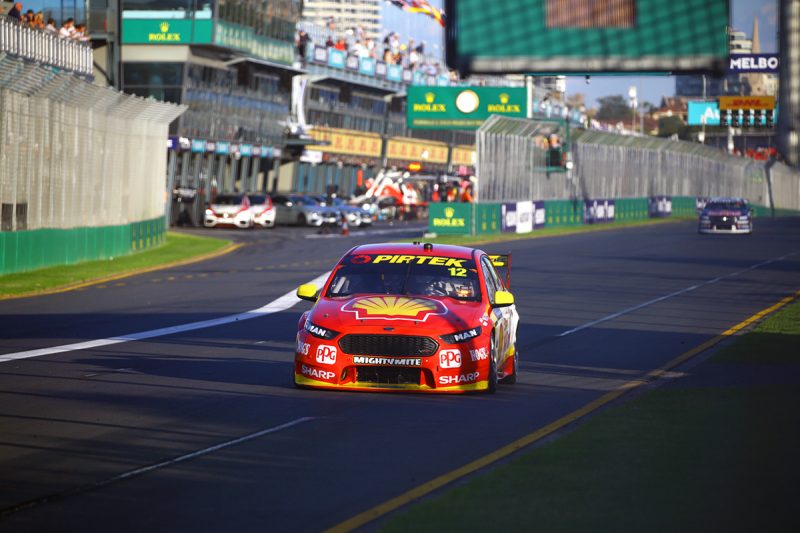 Fabian Coulthard says that being ‘more comfortable’ with his Shell V-Power Falcon was key to an improved performance in the Coates Hire Supercars Melbourne 400.

Coulthard left the opening round in Adelaide only 20th in the championship and 201 points off the lead after finishes of 21st and 16th.

Come Sunday afternoon at Albert Park, he had moved to 14th on the ladder and chipped 23 points out of his deficit to leader Shane van Gisbergen with the fifth-highest points haul of the weekend.

The 35-year-old finished third in each of the first two races of the weekend at the Australian Grand Prix and was running fifth when DJR Team Penske went the wrong way on switching to wets in a dramatic Race 5 of the championship.

He and team-mate Scott McLaughlin duelled in the Sunday race, with Car #12 edging Car #17 to sixth.

“I think it was a good bounce-back,” Coulthard told Speedcafe.com.

“We worked hard as a team in between Adelaide and here to get me more comfortable in the car and things like that, so it’s a credit to everyone.

“Two podiums and we were running in the top 10 apart from that 50-50 call with wets or slicks, and I think we could have been another easy top five in that one,” he said in summarising his Melbourne weekend.

“Confidence is good; I haven’t forgotten what to do.

“(I’m) just looking forward to getting to the next one and continuing to build on the momentum.”

The New Zealander described his lacklustre Adelaide 500 showing, in which he qualified only 18th and 12th for the two races, as “a bit of an anomaly” after a strong showing in the pre-season test at Sydney Motorsport Park.

He claimed that the poor results were down to not finding a set-up which was to his liking.

“You go to Adelaide with what you think’s the best set-up and we thought at the time that it was good but for whatever reason there were a few little instances which didn’t suit my style or how I was feeling in the car,” Coulthard explained.

“Adelaide’s a lot about confidence and if you don’t have confidence you struggle. I just wasn’t as confident as I have been (at Albert Park).”

McLaughlin meanwhile bagged his first two poles and first race win of the season and was confident that the Ford squad had made gains since the season-opener.

“I’m really happy (with the weekend), to be honest,” he told Speedcafe.com.

“We’ve bridged the gap slightly to sort of what we had at Adelaide and as a team having Fabian back up there too was fantastic.

“We had really good top 10 results apart from (Race 5) was obviously a bit of a stuff-up, but all in all we made ground.”

The 2017 championship runner-up particularly nominated starting race weekends closer to the pace as an objective come the next round at Symmons Plains.

“We’ve got to try and get our starting set-up better,” he said.

“At the start of the weekend I felt like we were closer than we were at Adelaide in regards to when we rolled the car out of the truck, so more comfortable.

“We’re not far away, it’s just we need to keep on our toes and keep pressing.”

Next Story Story: A lot more potential to come from Falcon