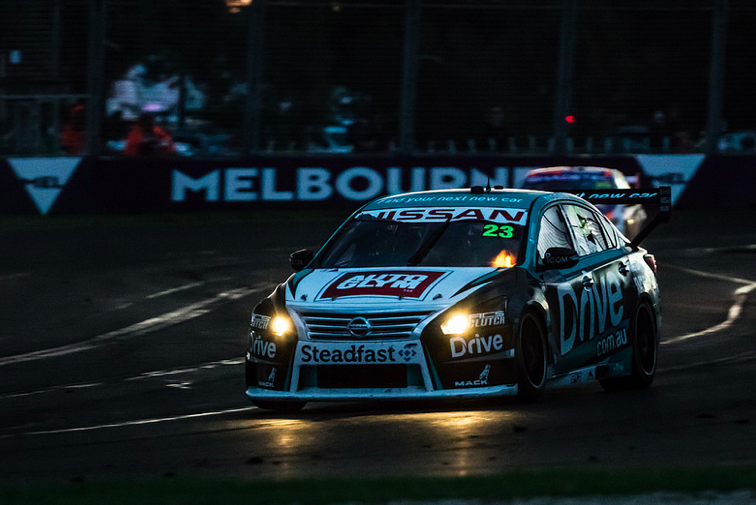 The gloomy conditions at the end of Race 5

Questions have been raised regarding the scheduling of Supercars twilight races following the poor visibility on offer to drivers in Race 5 at the Coates Hire Supercars Melbourne 400.

An unfortunate set of freak circumstances saw the thrilling second evening race of the inaugural championship round at Albert Park finish in dark and gloomy conditions.

A red flag in the preceding Formula 1 qualifying session caused a small delay to the start of the race scheduled to begin at 1830 local time on Saturday night.

This was then compounded by cloud cover and a heavy rain shower in the closing stages that saw drivers face a slippery track in rapidly fading light, forcing many to use headlights to help navigate the circuit.

Race control deemed the conditions fit to complete the 25 lap race in its entirety, which proved to be arguably the most entertaining witnessed at the venue.

The twilight race held a day prior in dry conditions finished with plenty of natural light remaining.

Garry Rogers Motorsport’s Garth Tander led calls for a change to the scheduling for 2019 after claiming it was too dark to race.

Schedules are however largely dictated by the Australian Grand Prix Corporation with Supercars a support act to F1 at the event.

“You couldn’t (see where you were going), that’s the thing,” said Tander after the race, which saw him collide with his pit crew.

“It was way too dark, the race was way too late and that’s ridiculous, it was really bad.

“Coupled with the rain in the end there, you couldn’t see which were the wet bits, which weren’t the wet bits. Same for everyone, but scheduling probably needs a bit of a look at.”

Reigning champion Jamie Whincup, who finished second behind winner Scott Pye, admitted visibility was deteriorating, but felt the conditions were safe to race.

“Our cars aren’t geed up for no (flood)lights. It would have been fine if it was clear skies but because it was gloomy already, the last light is a little bit earlier,” Whincup told Speedcafe.com.

“It was okay, it wasn’t dangerous at all, but it was starting to get real dark at the end.

“The cars are cool; I was just appreciating the fire coming out of the exhaust and the lights. The new ZB lights are awesome.

“As I always say, I love change and love mixing it up.”

While a fan of the new longer races at Albert Park, Triple Eight boss Roland Dane felt the situation was right on the edge and that Supercars should be careful when similar situations arise in future time certain races.

“I enjoyed it (the format). I thought the two longer races were really good the only thing I would change is that each of the qualifying sessions should be five minutes longer so you can have two runs if needed,” he told Speedcafe.com.

“I think it ( Race 5 on Saturday) was absolutely on the margin and I didn’t want to be the one to make the call.

“It was on the margin of what we should have been doing because at the end of the day I’m not sure the marshals could see the next post.

“We have always said that we need to be careful with these time certain races that look ok on paper, but when you get fading light and poor weather conditions it can impact the reality.”

Supercars is due to debrief all aspects of the event with the Australian Grand Prix Corporation in the coming days.

“There were some very unique circumstances behind the Saturday race but what we all witnessed was an amazing finish albeit in gloomy conditions,” Supercars General Manager of Corporate Affairs Cole Hitchcock told Speedcafe.com.

“The evening races were something we had wanted to do for some time and we will debrief with the Australian Grand Prix Corporation when we sit down to plan next year’s event.”