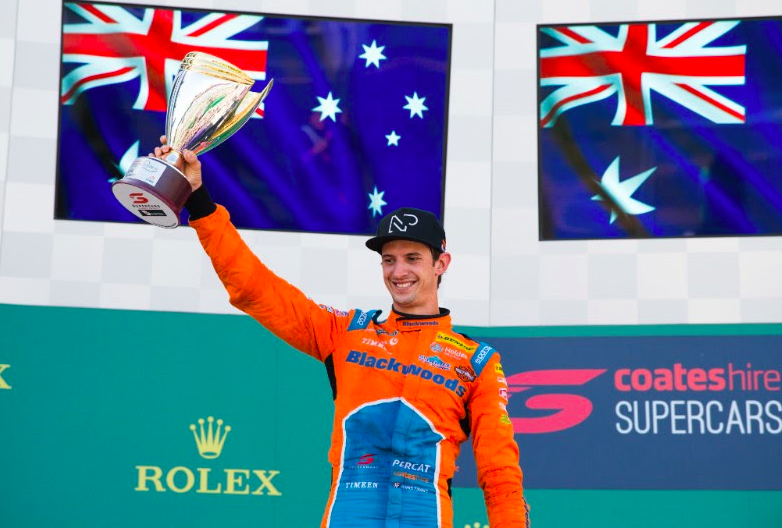 Nick Percat believes a settled environment at Brad Jones Racing coupled with a more relaxed approach has helped him achieve his best weekend in Supercars.

The South Australian was one of the standout performers during the Coates Hire Supercars Melbourne 400 having qualified inside the top 10 for all four races.

His outright pace was rewarded with two podium finishes including a third in Race 5 and a second in Race 6, after finishing inside the top 10 in the first two heats of the Albert Park weekend.

Percat endured a difficult maiden campaign at BJR last season highlighted by several unfortunate incidents and a lack of consistency, which left him 19th in the standings.

However, after six races he sits eighth in the championship having finished no lower than 15th so far this season, which he feels is due to being more relaxed and not forcing the issue with the car.

“To be honest, I didn’t think I’d really had a great weekend since I came out of Dunlop Series, with myself, Chaz and McLaughlin were going toe-to-toe every single weekend,” said Percat.

“Since then I’ve had an interesting little Supercars career, but to get a home at BJR, is something I was keen to do for many years.

“Last year I think I was too excited to go well because every time I was in a good position I hit the fence or something like that.

“This year I’m a bit more relaxed and I’ve got a good home there. The car works well and sometimes you take a step back from it and just drive it properly, you go faster.

“That’s what happened this year. We’re not forcing it. I really enjoy working with the crew and it’s the first time in my career in any stage – go karts, Formula Ford, Dunlop Series or Porsche – I’ve had the same engineer two years in a row.

“It’s good to have that and they try to make the car faster. For me this weekend was letting the car do the work, and that’s what it did.”

Percat’s effort arrived while his regular engineer Paul Scalzo was unable to attend the weekend due to personal commitments.

The squad promoted engineering manager Andrew Edwards into the role although a set-up produced by Scalzo proved fruitful for the weekend.

“(Scalzo) was not here, but he did all the work back at the workshop,” Percat explained.

“That’s why it’s pretty funny he’s not here, because the set-up he gave us, we didn’t touch.

“We probably made one or two changes to the car since Thursday morning.”

Brad Jones echoed Percat’s reasoning for his upturn in form this season.

“He (Percat) was just very happy with the car,” Jones told Speedcafe.com.

“They’ve got a set-up that meets his eye, he’s very happy in the car, and when you’re happy in the car and you feel like you’re getting the most out of it, then if you’ve got all the skills you’re going to get a good result. That is where he was at the weekend.

“I think it’s the same for every driver, to tell you the truth, when they’ve got a good tool that they believe in, they can usually get the job done. Nick’s done an amazing job for us at the weekend.”