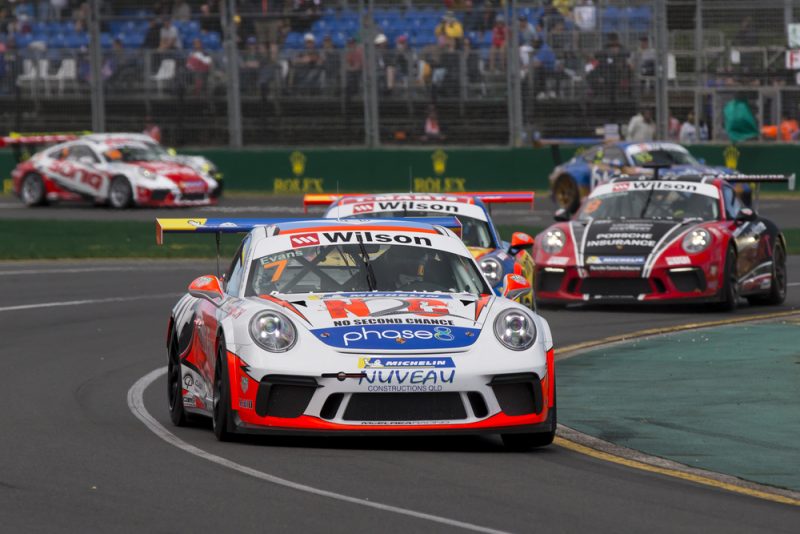 Jaxon Evans claimed victory in the fourth Porsche Carrera Cup race at Albert Park and snared the overall round win after previous pace-setter Dale Wood was taken out of the race at the first corner.

Evans inherited the lead after Wood was hit from behind by Sonic Motorsport team-mate Michael Almond, with the Bob Jane T-Marts driver locking up after going into the corner too hot.

Almond then bounced into the fast-starting Car #888 of Alex Davison, putting him and Wood both out of contention for the win before car #77 was forced into the pits for damage.

While Wood was able to be extricated from the gravel, he was shifted down to 22nd position and forced to work his way back through the field.

With two of his leading rivals out, Evans comfortably finished ahead of Dylan O’Keeffe who had moved through the field from seventh on the grid.

Wall was forced to start the race from 12th, while team-mate James Moffat was given a 40-second penalty for contact with Wall in Saturday’s Race 3 and relegated to 18th place on the grid.

Fifth place finisher Nick McBride looked to make amends for his Race 1 error, running as high as third early on, but a lock-up on Lap 4 allowed O’Keeffe through.

McBride then made contact with Josh Hunt and sent himself down the field and into seventh.

O’Keeffe moved past Love on Lap 4 for second place, while Wood made inroads among the Pro-Am drivers, slotting into 14th.

Greg Taylor put his Porsche into the fence after Turn 12 on the fifth lap while Hunt slipped down the order after a spin at Turn 2.

Round 3 of Porsche Wilson Security Carrera Cup Australia supports the WD-40 Phillip Island 500 on April 20-22, with both races forming part of the Endurance Cup.