BREAKING: Nathan Herne has been refused dispensation for a Superlicence ahead of a planned wildcard tilt at the Supercheap Auto Bathurst 1000…CLICK HERE

Bittersweet end to Melbourne 400 for Whincup 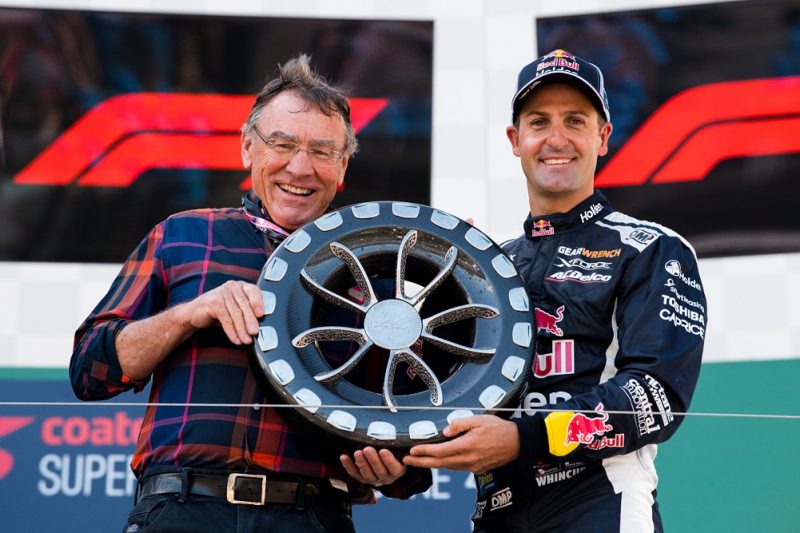 Jamie Whincup has described his Sunday as “sweet and sour” after winning the Larry Perkins Trophy despite a poor start which cost him in the final race at Albert Park.

Whincup had qualified on pole for Race 6 of the Virgin Australia Supercars Championship but made a poor start which he attributed to the short time before the lights were extinguished.

Car #1 was overtaken by eventual winner David Reynolds into the first corner, a manoeuvre which kept Whincup wide and allowed Nick Percat to set up a pass at the end of the next straight.

The top three remained unchanged until the end of the race, which was shortened by two laps to 11 due to a late Safety Car which hardly shook up the order.

While disappointed not to have notched up a second win, Whincup won the Larry Perkins Trophy by a clear margin having finished second, first, and second, in the earlier three races.

“Sweet and sour for me at the moment,” he said of his feelings post-race.

“(I’m) Just livid with myself bombing out the start.

“I was still working out my drink bottle and stuff, and yeah, bloody hell, and then the next minute we we’re ‘go’.

“I had the big panic, dump the clutch and bogged down, and that was the end of that.

“I expect more from myself to be honest.

“The car was okay but certainly not the quickest today. Overall, to come home with the Larry Perkins Trophy for the first time is fantastic.

“It was a great effort by everyone in the team to end up where we are at the end of the second round of the championship this year.

“We’ll keep the head down. There’s plenty of work to do behind the scenes to fix the car but we’ll slowly chip away and get there.”

The seven-time champion’s exploits at Albert Park see him move from 15th to sixth in the championship, gaining 91 points on leading team-mate Shane van Gisbergen.

The New Zealander was satisfied to have left still on top of the table despite a disastrous qualifying effort on the Friday, achieving starts of only 17th and 26th for Races 5 and 6 respectively.

Having managed to drive up to 13th in the latter, even if the timing of the Safety Car worked against him, van Gisbergen leaves with a points lead over next-best David Reynolds which has increased seven points to 49 over the course of the weekend.

“We had some good battles today but starting from the car park I couldn’t see the start lights, which sucked and actually made a big gap to the pack at Turn 1, so I played it safe and then started picking them off after that,” he recounted.

“We had some really awesome battles coming through, I passed a lot of cars and then unfortunately the Safety Car cut the race short.

“I’d saved my tyres actually passing people, so it kind of hurt us a bit because we still had very good pace.

“I think we had a really troublesome weekend on the first two days and then we got the car better.

“It didn’t fix our qualifying results, but I think we salvaged a good weekend, minimised the points loss and I think we’re still ahead in the championship by a small amount.

“We did a good job from race one (of the weekend) onwards.”

The next event is the Tyrepower Tasmania SuperSprint at Symmons Plains on April 6-8.