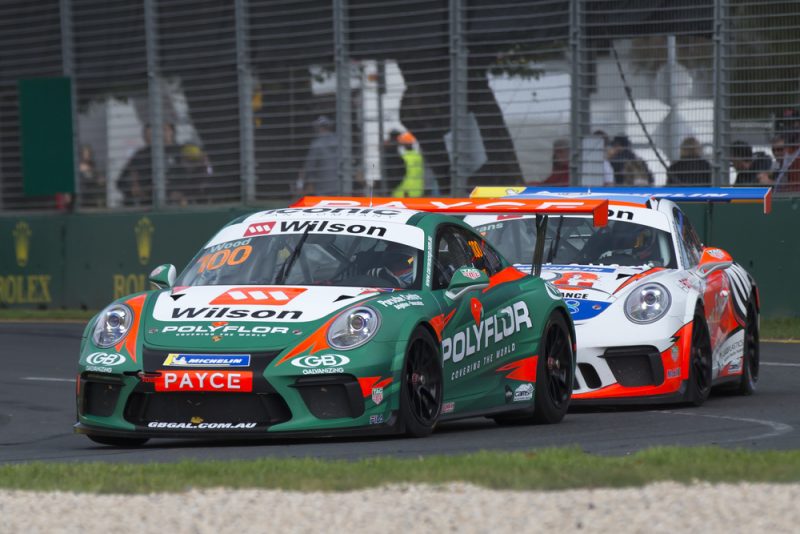 Dale Wood made it three from three in Carrera Cup at the Australian Grand Prix, taking another lights-to-flag victory at the Albert Park circuit.

With the race beginning under the Safety Car due to a failure to the starting lights system from the previous wet weather, Wood retained his advantage over McElrea Racing’s Jaxon Evans at the green flag.

While the young Kiwi was glued to the rear wing of Wood’s Sonic Motorsport Porsche throughout the race, the former Supercars driver absorbed the pressure to claim his fourth win in the category for the season.

Alex Davison was one of the biggest movers in the race, with the Porsche Centre Brighton/Doncaster driver claiming the final podium spot after a late-race battle with Sonic duo Michael Almond and Jordan Love.

The biggest talking point of the race came as James Moffat made an audacious attempted overtake on team-mate and Wall Racing owner David Wall heading into the final corner on Lap 3.

Contact sent the pair pirouetting off the track and leaving Wall with damage to his Porsche.

While Moffat continued in ninth place, defending champion Wall plummeted down the order and scored his lowest Carrera Cup finish since 2016’s Sydney Motortsport Park round in 14th.

At the time of the friendly fire, the incident opened the door for Love to make a successful pass on Davison for fourth place. Davison was unrelenting in his pursuit to reclaim the position and made a successful pass at Turn 13 on Lap 8 before setting his sights on Almond.

Evans continued to pressure Wood, with the gap consistently under half a second. A front tyre lock-up by Wood at the first corner on the ninth lap looked to give Evans a sniff, but he was unable to get past.

A last-ditch effort at Turn 13 on the final lap proved too much for Evans, handing Wood the win while Davison pipped Almond over the line for the final spot on the podium.

A collision between Pro-Am drivers Anthony Gilbertson and Graham Williams on Lap 2 at Turn 1 left debris on the track while Stephen Grove proved to be the best of the class in 12th overall.