Jamie Whincup wins in the wet at Albert Park

Jamie Whincup wins in the wet at Albert Park 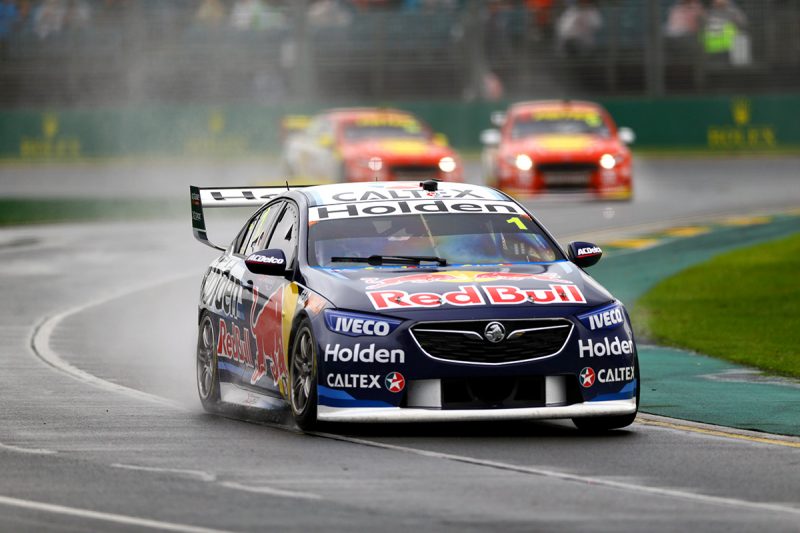 Jamie Whincup has claimed his first Supercars victory of 2018, leading the second race of the Coates Hire Melbourne 400 from start to finish despite two offs in the wet conditions.

After the field ran the first two of 13 laps behind the Safety Car, Whincup pulled away from the Shell V-Power Racing Falcons of Scott McLaughlin and Fabian Coulthard.

The leading trio finished the race where they started, with Shane van Gisbergen’s late overtake on Cam Waters ensuring it was another top-four lockout between the powerhouse DJR Team Penske and Triple Eight teams.

“It was good run,” said Whincup.

“I was pretty loose out there, nearly speared off a couple times. I actually nearly spun on the warm up lap as well, which could have been embarrassing.

“Unfortunately I’ve used up some of my credits early, but that’s okay, we’re chipping away. Probably another wet race this afternoon so we’ll see how we go.”

Mark Winterbottom led Tim Slade home to round out the top 10, underscoring the performance of the Tickford and BJR cars this weekend.

With heavy rain falling at the start of the race, Whincup led from the green flag with the pack taking a cautious approach on the first racing lap.

Van Gisbergen, who usually stars in the wet, made an uncharacteristic error in running too deep into Turn 11 and having to shortcut Turn 12 in the early running. The move invited Caruso to attack the Kiwi with the Nissan driver impressing in the tough conditions.

Hazelwood ended up in the wall just around the corner before pitting with a broken steering arm, the incident to be investigated post-race.

While the rainfall slowed, Whincup continued to battle the conditions after running off the track at Turn 1 on lap 6. The mistake narrowed the gap to McLaughlin behind him before Whincup built it back up to 2.5 seconds on the next tour.

History would repeat on Lap 10, with Whincup having another off at the same spot while maintaining the lead.

James Courtney was turned around at Turn 4, with the Walkinshaw Andretti United driver shuffled down the order after racing with Jack Le Brocq (Tekno Autosports) and Andre Heimgartner (Nissan Motorsport) for 16th. Le Brocq was handed a 15 second penalty for the contact to be added to the race time.

After impressing on Friday, Anton De Pasquale (Erebus Motorsport) was another to run off track at Turn 1 in the wet and slipped through the field.

Craig Lowndes’ horror run continued with the veteran pitting on Lap 9 and pulling his car into the garage after reporting earlier contact with Heimgartner.

“(The) steering wheel is cactus from another competitor unfortunately,” said Lowndes.

“We were on the outside of (Turn) 15 and we were going around and he understeered straight into my left front.

“The steering is all bent now. I can turn right okay, but I just can’t turn left.”

Mostert and Percat provided the late race entertainment, with the duo swapping places between Turns 3-5 before the Tickford driver eventually snatched sixth place.

Van Gisbergen’s fortune improved as the race went on, with the 2016 champion tailing Waters for fourth place.

A slide at Turn 10 on the final lap by Waters opened the door for van Gisbergen to snatch the position and hold on until the chequered flag.

“I kept him behind me most of the race,” said Waters.

“It was a pretty good battle. Just a pity it didn’t finish a lap earlier.

“You drive to whatever the conditions. You’ve got to be on it from the first lap. But it’s all the lines they’ve painted black that are dangerous.”

David Reynolds (Erebus Motorsport) struggled throughout the race, with the 12th place finish dropping him to third in the championship, behind McLaughlin.

Tickford’s Richie Stanaway was forced into pitlane on the first lap to fix the rain light on the FG X Falcon, halting the running of the wet weather expert by a number of laps.

The Supercars return to the track for Race 5 of the season at 1830 local time/AEDT.