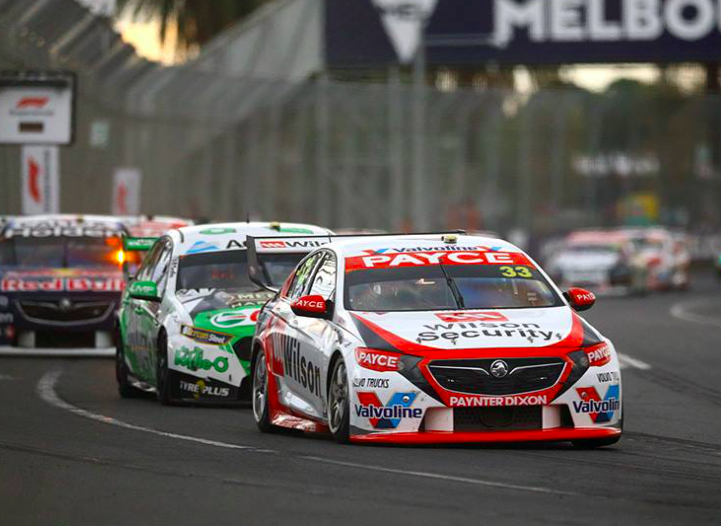 Garry Rogers Motorsport has confirmed that two of its mechanics suffered bruising in a wild pit stop incident during an eventful rain-affected race at the Coates Hire Supercars Melbourne 400.

Garth Tander collected two of his team members as he pitted for wet tyres when conditions worsened in the latter stages of Saturday’s twilight race.

The slick shod Holden Commodore slid on the concrete apron as Tander attempted to slow, knocking over his right rear tyre changer and the air spike operator.

Tander said the conditions had caught him out.

Both crew members were assessed at the Albert Park circuit’s medical centre before being released with bruising to their legs. 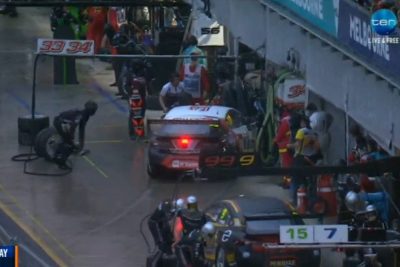 “They’ve both been off to the medical centre for precautionary X-ray checks just to make sure nothing was broken,” team manager Stefan Millard told Speedcafe.com.

“Glad that’s all okay, nothing serious, fair bit of bruising in the leg area, (but) they’re right basically.

“Obviously there was the change in bitumen to concrete on slick tyres, a lot of wet weather, and obviously in that kind of race mode every second counts.

“It was an unfortunate error by GT but we’ll move on from those things. It’s probably a race we’d like to put behind us.”

The crew members will undergo another medical check tomorrow but are expected to return to action for Sunday’s final race.

“They’ll go get another check out in the medical centre in the morning and at this stage we’re all good to go,” Millard added.

Tander finished the race in 26th position having been forced to return to the pits to replace the right rear tyre, while team-mate James Golding came home 24th following a spectacular spin at Turn 12.

Next Story Whincup: Passing Pye ‘would have felt bad’

Previous Story Ricciardo: Mercedes pace 'a punch in the stomach' for rivals