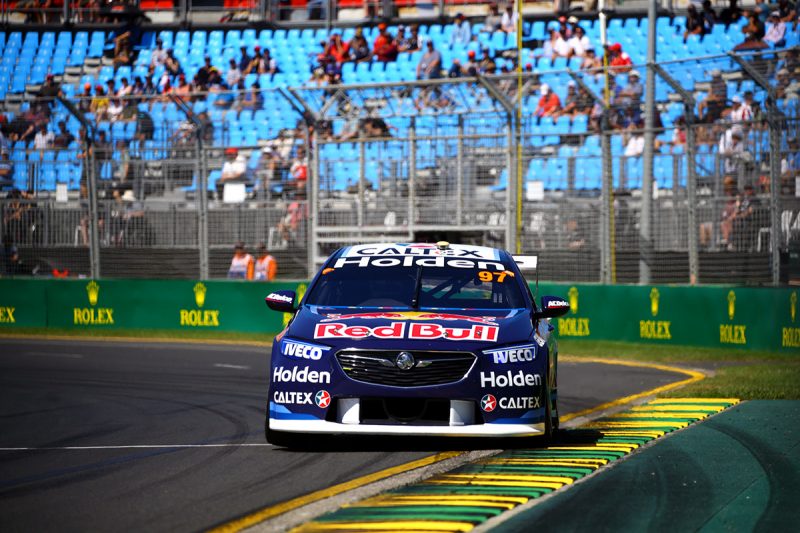 Shane van Gisbergen has described his car as ‘rubbish’ in today’s qualifying sessions before making inroads in the afternoon’s first Supercars race of the weekend at Albert Park.

Van Gisbergen is set to start Race 6 from last on the grid having not even set a time in the corresponding qualifying session.

The championship leader picked up a kerb strike on his first run and in his late second flyer ran his Red Bull Holden Racing Team Commodore off the road at Turn 1.

In the session just prior, van Gisbergen qualified 17th for Race 5.

“The qualifying sessions were a bit rubbish today; we worked really hard overnight and made some changes to rectify our problems but it was just junk, the car was rubbish,” he said.

“We really struggled, we came out with 17th and last position so that was a shame.

“The result of the first qualifying was because of car balance and the second one, I stuffed up just trying to get the most out of it.”

Triple Eight team manager Mark Dutton said shortly after the sessions that the team couldn’t “put (their) finger” on the issue which was apparently unsettling van Gisbergen.

According to the New Zealander, significant set-up changes yielded some performance gain for Race 3 of the season, which followed later in the day.

He ran effectively fourth for the duration of the 25-lapper, losing ground to the front-runners after the first handful of laps but recovering some time towards the end.

“We had a three-hour break before the race and we made huge changes; changed a few parts and the car was much better in the race,” van Gisbergen recounted.

“Unfortunately, in doing that, we’ve started again with set-up. The balance was still a little off in the race but the pace was good, the tyre life was good and we were really catching up at the end.

“I’m stoked that we made some progress and, in the race with the most points, we got a good result.”

“From now on, it just gets harder and harder with our grids (for Races 5 and 6) so we’re going to have to push pretty hard.”

Craig Lowndes had an up and down Race 3, starting in the back half of the field but moving into the top 10 due to an early pit stop.

However, tyre degradation on the long run home wiped out virtually all of the gains and car #888 faded to 16th by the chequered flag.

Lowndes did, however, put in an improved qualifying performance relative to Thursday and will start Races 5 and 6 from 10th and 12th respectively.

Like van Gisbergen, he had only come out of the qualifying sessions for Races 3 and 4 in 17th and 26th due to errors which compounded when he was baulked by James Golding.

“We had a much better day today,” said Lowndes.

“We didn’t change the car too much in the qualifying sessions.

“We were hoping the track conditions would come to us, which they did, so I’m happy to be in the top 10 for the first one (Race 5) and just outside in the second one (Race 6).

“It’s a big improvement for us as a team and I think that we are moving forward.”

Jamie Whincup was the standout for Triple Eight on the second day of the Coates Hire Supercars Melbourne 400, qualifying fourth and on pole for Races 5 and 6, then finishing second in Race 3.

Having moved into the race lead with an undercut, he conceded that he did not have to car to fend off eventual winner Scott McLaughlin during the late-afternoon affair.

“We gave ourselves every opportunity, we pushed hard, we were aggressive on strategy and we did everything to win the race but like always, and we want it to, it came down to the quickest car today,” said Whincup.

“We weren’t the quickest car, we were second quickest and we’ll work on trying to be faster for tomorrow.”

The Supercars are next on track at 1240 local time/AEDT for the 13-lap Race 4, when Whincup will start from pole.