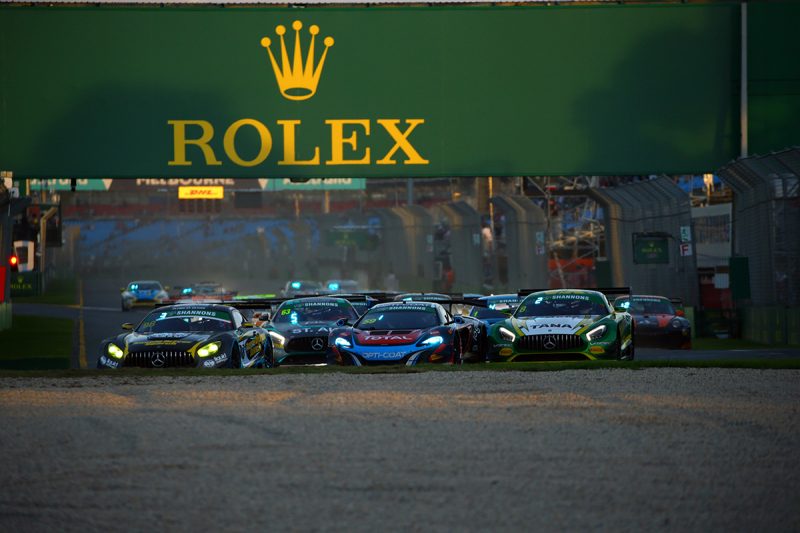 Jaie Robson has won CAMS Australian GT Race 2 at Albert Park with a spirited drive in his first weekend in the championship.

Robson (Aussie Driver Search Mercedes-AMG) made two daring attempts to pass pole-sitter Fraser Ross, the second of which he managed to pull off and then drive away with the race in the two laps which remained.

The race began in twilight at 1900 local time after a crash in a demonstration session necessitated barrier repairs during the original late-morning timeslot.

Ross led out of the opening corners despite a strong challenge from Robson, who started third, and they quickly established a comfortable margin over the rest of the 31-car field.

Robson, fresh out of a breakout season in Aussie Racing Cars, dived down the outside at Turn 3 on Lap 3 but couldn’t hang on and slotted back into second via a sojourn on the grass.

With dusk descending, they ranged up on traffic on Lap 9 of 11.

Both cleared the back-markers before Robson stuck his Mercedes-AMG down the inside at Turn 14 and just managed to pull up to make the corner.

From there, he was unchallenged, having also finished a commendable eighth when racing with the Pro drivers in Thursday’s opener.

Hackett came from fifth on the grid to pass Geoff Emery (Jamec Pem Audi R8) early in the race before easing by Max Twigg (#8 Scott Taylor Motorsport Mercedes-AMG) with a textbook move at Turn 3 on Lap 5.

Pro drivers, as well as those in single-driver entries, return to their cars for Race 3 tomorrow at 1200 local time/AEDT.

American James Weiland has qualified on pole for Race 1 of the Ferrari Challenge, which starts tomorrow at 1045.

Weiland edged Renaldi Hutasoit by less than 0.06s during the 25-minute session, while Rama Danindro made for two Indonesians in the top three.