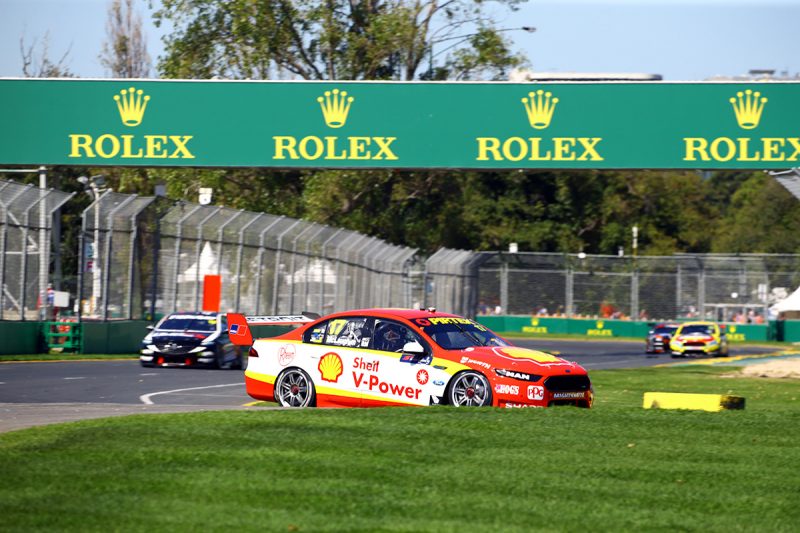 Scott McLaughlin usurped Jamie Whincup after the chequered flag to finish fastest in Practice 2 for the Coates Hire Melbourne 400 at Albert Park.

He ended up 0.14s faster than Practice 1 fast man Whincup and a further 0.44s ahead of Shell V-Power Racing team-mate Fabian Coulthard.

McLaughlin finished only 16th in Practice 1 but immediately vaulted well clear of the field on his first run of the day on new tyres, early in the second session.

He took another new set to improve in the final 10 minutes, before going faster again with a 1:55.2982s after the clock had counted down to zero.

Whincup sat below the DJR Team Penske duo ahead of his final run before a brief spell in the top spot thanks to his final-minute effort.

The Red Bull Holden Racing Team driver was slightly slower but virtually matched his earlier benchmark in setting a 1:55.4399s.

Coulthard was the early pace-setter in the #12 FGX Falcon and improved half a second during his second run to end the half-hour session in third.

Nick Percat (Brad Jones Racing) was a late mover into fourth, ahead of Scott Pye (Walkinshaw Andretti United) and the Nissans of Rick Kelly and Andre Heimgartner, the latter of whom briefly held third with his final effort.

Van Gisbergen had improved from 19th position before his final run.

Tim Blanchard was 22nd fastest in a Brad Jones Racing Commodore which underwent a gearbox change between sessions.

Qualifying for Races 3 and 4 of the championship take place this afternoon from 1620 local time/AEDT.