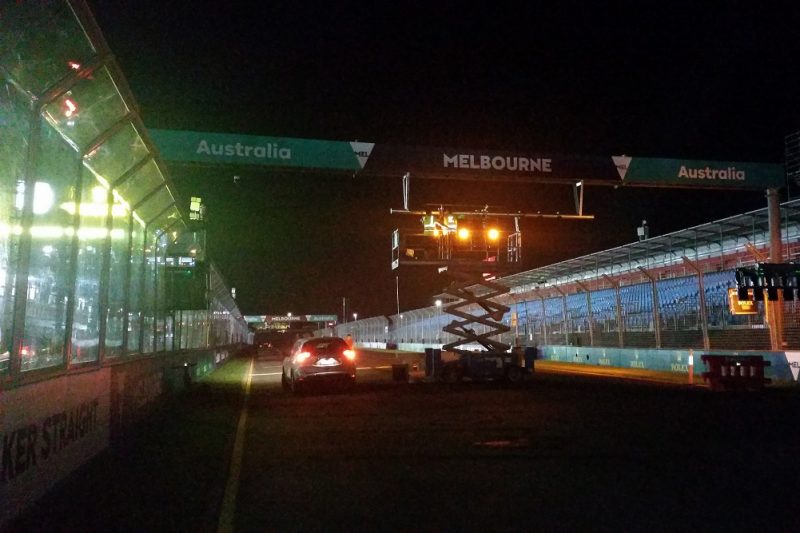 The introduction of the halo cockpit protection device has forced the FIA to adjust the start light gantry at Albert Park to address driver visibility fears.

Concerns had been raised by drivers that the new-for-2018 device could impair vision of the lights at race starts.

To combat this the world motorsport governing body has lowered the main light gantry, a measure which will be implemented at all Formula 1 circuits.

A second set of lights, which were positioned on the middle of the grid, have also been moved further forward to assist drivers.

The field will be allowed to compete practice starts to test the new lighting positions at the end of both 90 minute practice sessions on Friday.

“With the halo what we’ve asked every circuit to do is to make the lights at a standard height above the track,” said F1 Race Director Charlie Whiting.

“We’ve also put a repeat set of lights, in this case off to the left, over the verge.

“Those repeat lights were normally halfway up the grid, and they were fitted round about 2009, when the rear wings became higher on the cars.

“Some drivers complained about not being able to see the main start lights, so that’s when we introduced an extra set.

“But now the wings have been lowered, there’s no need for those halfway up the grid. So I’ve decided to utilise them somewhere else.

“Pole position seems to be the worst-case scenario with the halo there – maybe the driver can’t quite see the lights, or see only half of them, and he might have to move his head too much.

“But then he’s got a repeat set of lights which are five metres further down (the track).

“What I thought would be a good idea was to give the driver sight of those lights rather than have them look at them for the first time on Sunday evening.”

The change follows the introduction of an third DRS zone at the Albert Park circuit, located at the Turn 11-12 chicane.

Meanwhile drivers have suggested that the halo should be used as a means of driver identification, given that it obscures the view of their crash helmets.

Lewis Hamilton, Sebastian Vettel and Daniel Ricciardo voiced similar opinions on the topic, with the latter suggesting a colour scheme should be painted onto the halo to help distinguish between team-mates.

“The only thing I could think of was putting something on the halo to distinguish team-mates,” said Ricciardo.

“Is it the camera or the rollhoop or whatever that sometimes one driver has yellow so you can kind of tell a little bit there?

“Maybe do something between team-mates with the halos just to give fans a little bit of an idea who’s behind the wheel because you don’t really see the helmet now.”