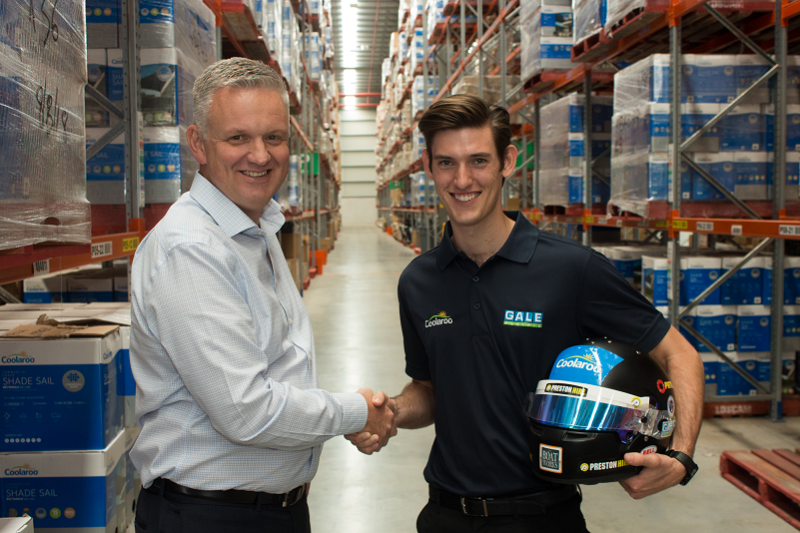 Matt Brabham has celebrated this week’s season-opening Australian Formula 1 Grand Prix by signing an ambassador agreement with Gale Pacific for both Australia and the US.

The deal was announced at Gale Pacific’s head office in Melbourne today on the eve of Brabham taking up his regular role as an F1 Expert Host at the Albert Park circuit.

Between F1 duties Brabham will be a part of the Preston Hire Racing operation, which he will race with in this year’s Pirtek Enduro Cup.

Brabham will carry Gale Pacific and Coolaroo branding on his race suit and helmet for the Supercar events as well as the Stadium Super Truck Series and will be involved in a mix of corporate events on both sides of the Pacific.

“When it comes to textiles there are few Australian companies that have the history or the reputation of the name Gale Pacific and then same could be said for the name Brabham when it comes to motorsport,” said Gale Pacific’s Group Managing Director, Nick Pritchard.

“Like Sir Jack all those years ago when he became the only person to win the F1 world title in a car he designed and built himself, Gale Pacific is innovative and proudly flying the Australian flag in the world marketplace.

“Matt is a very talented young driver who will be a perfect fit for our brands and our values. We are delighted to be with him at this stage of his career.”

Gale Pacific is an Australian company producing advanced technical textiles for an array of commercial applications across the globe . They are also home to Coolaroo, a leading brand in domestic shade products, including shade sails, shade cloth, gazebos, umbrellas and window coverings.

It has been a big couple of months for Brabham who won Class C at the Bathurst 12 Hour with Tony Longhurst and Aaron Seton in The Boat Works BMW GT4 before signing his deal with Charlie Schwerkolt’s Supercar team. Brabham has also penned a personal deal to represent the Preston Group in both Australia and the US.

“It has been an incredible couple of weeks,” said Brabham.

“I cannot thank Nick Pritchard and the Gale Pacific team enough for their support as we move into the next phase of my career.

“We have created a boutique program which will provide some exciting experiences for Gale’s customers and staff in Australia and the US that we anticipate will evolve into some valuable business.

“We have been working for a long time to take this next step and it goes without saying that a young driver in my position could not be in a position to keep fighting for a seat without the support of companies like Gale Pacific.”

Brabham currently leads the Stadium Super Truck Championship after an overall win in Round 2 in Adelaide earlier this month.

He heads to Long Beach in California for Round 3 on April 13-15 before returning to Perth for Round 4 in May.