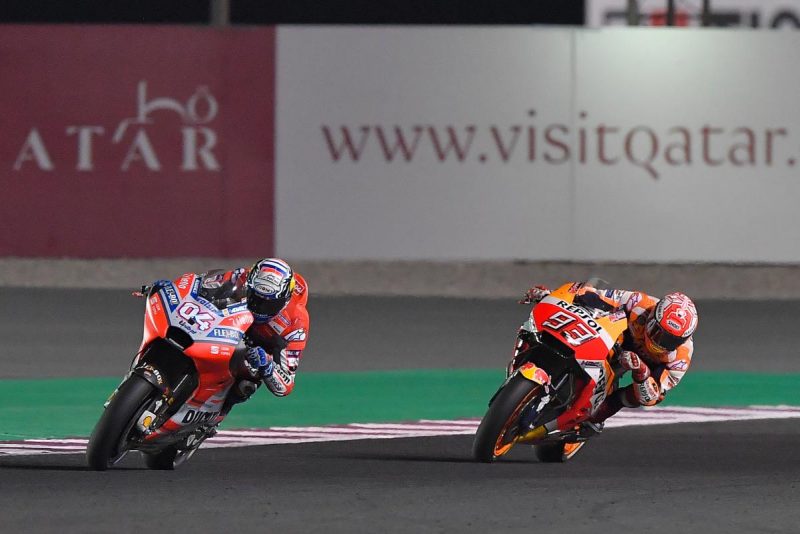 Andrea Dovizioso has beaten Marc Marquez in a season-opening Qatar MotoGP which went down to the final corner.

Marquez did everything to find a way past Dovizioso on the final lap and managed to do so at the very end, but didn’t have the power to stay in front.

Valentino Rossi was close behind in third while his Movistar Yamaha team-mate Maverick Viñales rode from as low as 15th to finish sixth with a wet sail.

Zarco ran wide at the final corner on Lap 1 but rode back past Marquez up the main straight and remained in first position for the next 16 laps.

Pedrosa, however, lost third place at Rossi at the start of Lap 2 and had slumped all the way back to eighth on Lap 5.

Rossi passed Marquez for second on Lap 6, while Dovizioso’s recovery from a somewhat poor start continued when he got by Danilo Petrucci (Pramac Ducati) and Cal Crutchlow (LCR Honda) to take up fourth on Lap 8.

Rossi continued to shadow leader Zarco but was sucked into a moment at Turn 1 on Lap 11 when he left the door open for Marquez to reclaim second position.

Dovizioso also passed Rossi a lap later before using his factory Ducati’s horsepower advantage to pick off Marquez for second on Lap 12.

On Lap 13, Zarco seemed to be putting the hammer down, prompting Marquez to slip underneath Dovizioso at Turn 6 and give chase.

Dovizioso re-passed Marquez at the start of Lap 15 in a lead group which still numbered seven, Pedrosa at the tail of it.

The first genuine lead change came at the start of Lap 18 when Dovizioso powered past Zarco, prompting Marquez to throw the #93 Honda down the inside at Turn 1 and do just enough to pull up and take over second position.

That signalled the start of Zarco’s decline on worn rubber and the long-time leader faded to eighth by the chequered flag.

Dovizioso, however, pulled off the ultimate fastest lap on Lap 19 of 22 as the battle for victory became a race in two.

Hamstrung by his power deficit, Marquez was clearly pushing hard on the final lap to find any way through, and outbraked #04 at the very last corner.

However, Dovizioso cranked open the throttle and rode back past to open his account with 25 points.

“It was a really bad start but I was calm, I recovered slowly and saved a lot of tyres, and was able to push at the end,” recalled the 2017 championship runner-up.

“Like always with Marc, it was very difficult on the last lap, but I was able to beat him again and I’m so happy.”

Marquez was pleased to take a second placing away from a circuit which does not favour the Hondas.

“Fair race, show go on, everything in, all in,” he said of his last-corner dive.

“I knew before the race that here is maybe one of the most difficult tracks for me, but even with that I tried and when Dovi was pushing I was limit and extra limit and closing front and losing the rear.

“I arrived close in the last corner, I tried, but I thought that Dovi was able to overtake me before the finish line.

“(I’m) very happy because here the podium was the main target. Second place, we only lost five points, so I’m really happy.”

Rossi was within a second of Dovizioso in third, followed by satellite team riders Crutchlow and Petrucci.

Viñales’ race pace was far better than his qualifying performance as he salvaged sixth position from 12th on the grid and the same position still with 10 laps remaining.

At his old team, Marc VDS Honda, Franco Morbidelli was the top rookie in 12th.

Alex Rins (Suzuki Ecstar) and Jorge Lorenzo (Ducati Team) both retired with separate crashes on Lap 13, the former having just passed Petrucci for sixth when the latter was 10th.

Round 2 takes place in Argentina from April 6 to 8 (local time).

Next Story Miller promises ‘way more to come’ from Ducati