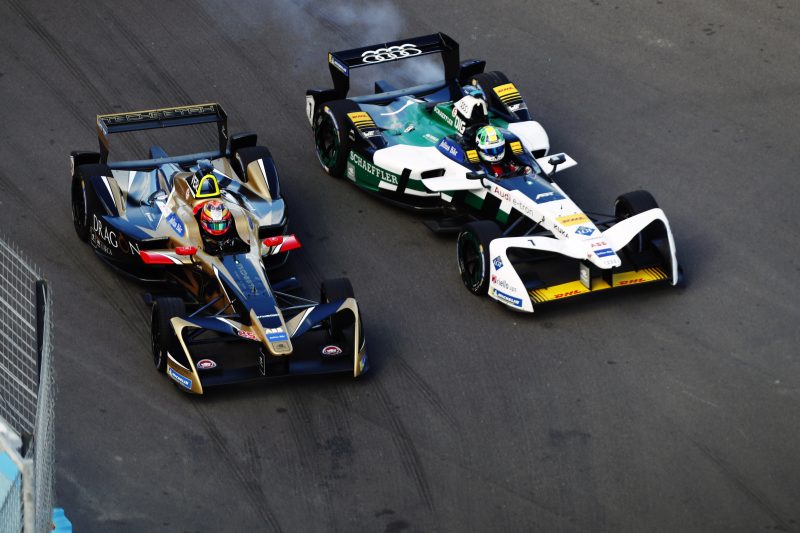 The former Toro Rosso Formula 1 driver was locked in a battle with di Grassi from the start after inheriting pole position from the Brazilian, who was penalised in qualifying for cutting a chicane.

Di Grassi chased Vergne hard in the early stages with the fight for the lead continuing after a brief Safety Car caused by Nick Heidfeld’s stricken Mahindra.

The top two made their mandatory car swaps on lap 19 with Vergne emerging from the pits ahead of di Grassi for what was a tense final 17 laps.

Di Grassi tried everything to pass the Techeetah driver which resulted in contact on two occasions as the race reached its climax.

However, Vergne managed to hold on to take the win by 0.4s from di Grassi to open up a 30 point lead at the top of the standings.

Virgin Racing’s Sam Bird briefly joined the top two to make it a three-way dice for the lead, before dropping back in the closing stages to finish third, 2.1s adrift.

New Zealand’s Mitch Evans produced a stunning drive from 16th to fourth after he was penalised in qualifying for a weight distribution infringement.

The result was the Jaguar Racing driver’s fourth top 10 finish of the season.

Felix Rosenqvist finished fifth for Mahindra ahead of Alex Lynn (Virgin Racing), who was one of three drivers penalised in qualifying for cutting the chicane.

Lynn had run as high as third in the race before dropping down to sixth in front of Oliver Turvey (NIO Formula E team).

The top 10 was completed by the Dragon Racing duo of Jose Maria Lopez and Jerome d’Ambrosio and Venturi’s Maro Engel.

Sebastien Buemi and Nelson Piquet Jnr retired after the pair were forced to switch cars early after incurring damage early in the race.

The Formula E Championship heads to Rome for Round 7 on April 14.