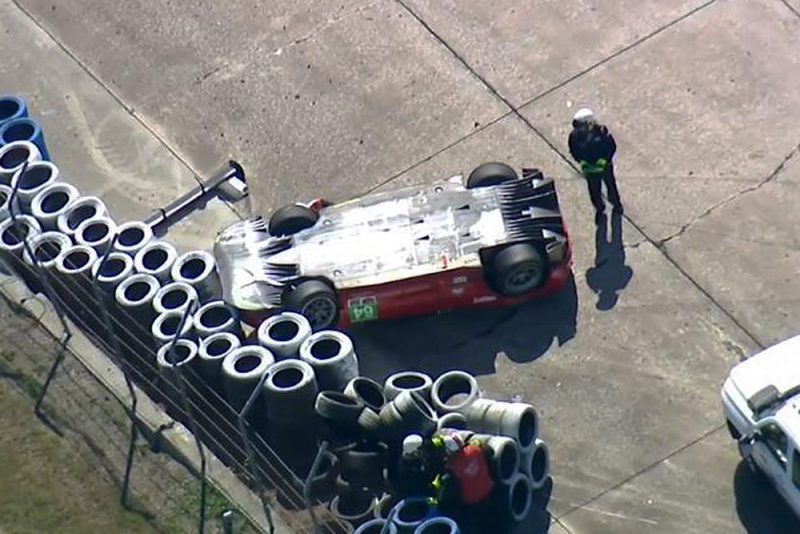 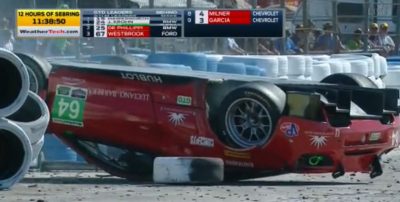 A chaotic start to the 12 Hours of Sebring saw the second fastest qualifier reach only the first corner and a Ferrari on its roof within 25-minutes of the race start.

Having just been lapped, Frank Montecalvo found his road blocked when Sebastian Saavedra lost the back JDC-Miller Motorsports Oreca LMP2 at the final turn.

As the spinning Saavedra rolled backwards Montecalvo clipped the Oreca with the Ferrari’s right front.

The clash saw the GTD Class Ferrari 488 turned on its roof, before sliding into the tyre barrier and out of the 12-hour race inside of 25-minutes of the start.

Predictably, it drew the first full course yellow of the race after the race stayed green following an opening corner stoush that accounted for Olivier Pla.

The second fastest qualifier made light contact with the #90 Spirit of Daytona Racing Cadillac DPi as Pla entered the opening turn which saw the Frenchman slide off the circuit at the head of the field.

Pla managed to drag the Tequila Patron ESM Nissan DPi back around to the pits before being quickly pushed behind the wall with gearbox damage, the team confirming its retirement soon after.

The 12 Hours of Sebring continues, with the chequered flag scheduled to fall at 1330 AEDT.

It was a wild first hour of the #Sebring12 that included this wreck between @sebsaavedra & @FMontecalvo. Montecalvo walked away. pic.twitter.com/Uf0o9u0Q3w

Next Story ESM Nissan takes out 12 Hours of Sebring