Valentino Rossi has penned a two-year contract extension with Yamaha which will take him to the end of the 2020 season in MotoGP.

Rossi will continue on at the factory team until at least the time when he is 41-years-old, having celebrated his 39th birthday during the Buriram pre-season test.

“When I signed my last contract with Yamaha, in March 2016, I wondered if that would have been the last contract as a MotoGP rider,” said the seven-time premier class world champion.

“At that time, I decided that I’d take that decision during the following two years.

“During the last two years I came to the conclusion that I want to continue because racing, being a MotoGP rider, but especially riding my (Yamaha) M1, is the thing that makes me feel good.”

The deal was made public the day before the start of the season-opening Qatar Grand Prix weekend, matching the timing of the announcement of his current contract.

Movistar Yamaha boss Lin Jarvis had previously indicated that a decision might take place further into the season this time around.

However, speculation about a re-signing grew when Rossi stated during the Qatar test a fortnight ago that his VR46 team would not move up to MotoGP before 2021, despite Tech3 switching from Yamaha to KTM from next year. 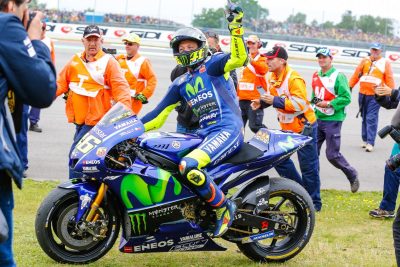 Rossi explained that his mind was indeed made up during pre-season testing.

“At the end of last season, I spoke with Yamaha and I said I would decide during the winter test,” said the Italian.

“If I’m able to survive through the winter test, I can sign.

“At the end of the winter test it was quite good. Everybody is very close and some days we suffer (ie are not competitive) but I like the bike, I feel quite comfortable, I feel quite fast.

“We still have a lot of work to do, but I decided after the test.”

Rossi joined Yamaha in 2004 and won the first of his four titles with the marque during that season.

He finished on the podium six times last year, including the 89th premier class win of his career in The Netherlands, but was hampered by a training crash which caused a broken tibia and fibula.

The injury cost Rossi a start in the San Marino Grand Prix, but he sensationally returned for the following race in Aragon.

Rossi’s team-mate Maverick Viñales and Repsol Honda’s Marc Marquez have also recently re-signed with their respective teams for the 2019 and 2020 seasons.

The 2018 MotoGP season begins tonight (AEDT) with practice in Qatar.