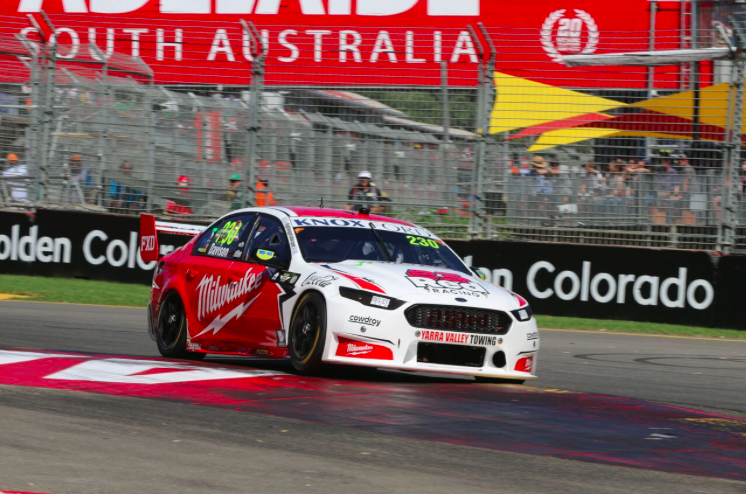 An impressive start to the season at the Adelaide 500 has seen Milwaukee Racing boss Phil Munday revise his hopes for the new look Supercars squad this year.

The operation borne out of Lucas Dumbrell Motorsport emerged as one of the surprise packages at the season opener after new recruit Will Davison guided its Tickford Racing-built Ford Falcon to finishes of eighth and 12th in the two races.

Davison quickly adapted to his new surroundings by earning a berth in the Top 10 Shootout on the Saturday much to the surprise of the paddock and onlookers.

The team is now led by former Holden Racing Team stalwart Rob Crawford, who worked with Davison at the Walkinshaw team before leaving in 2011, with Crawford joined by the experienced Rob Palermo as Davison’s race engineer.

While keen not to get complacent, the squad’s fast start has left Munday feeling confident about his team’s chances this year, with a podium finish its next target.

“It was a great effort by all my guys, they did a fabulous job,” Munday told Speedcafe.com.

“To get to the top 10 shootout on the Saturday was way past my wildest dreams.

“To come out of the blocks and do that was phenomenal. It was a very good effort by all, Will is a cracking driver and the boys did a great job.

“I don’t want to get too confident but I do think we have got a really good team, a great driver and a very good car, so I think if we can keep out of trouble, I would be very happy to have a podium at some point soon.

“I think our strategy was to stay calm and enjoy the weekend. In everything we did we were proactive rather than reactive.

“For Will’s confidence it must be fabulous and it certainly helped me in feeling confident about what we are up to this year.

“To do what they did in the first round was an absolute credit to Rob Crawford who pulled it all together.

“Rob Palermo was such a calming voice on the radio and to the guys. There was no panic in his voice, it was just great.

“If they can do that in the first round then I’m not sure how good it will be when it comes to Round 10, it will be fabulous.”

The squad will be looking to build on its strong start to the season when the championship heads to Melbourne’s Albert Park for the second round from March 22-25.