Harvick goes three in a row with Phoenix win 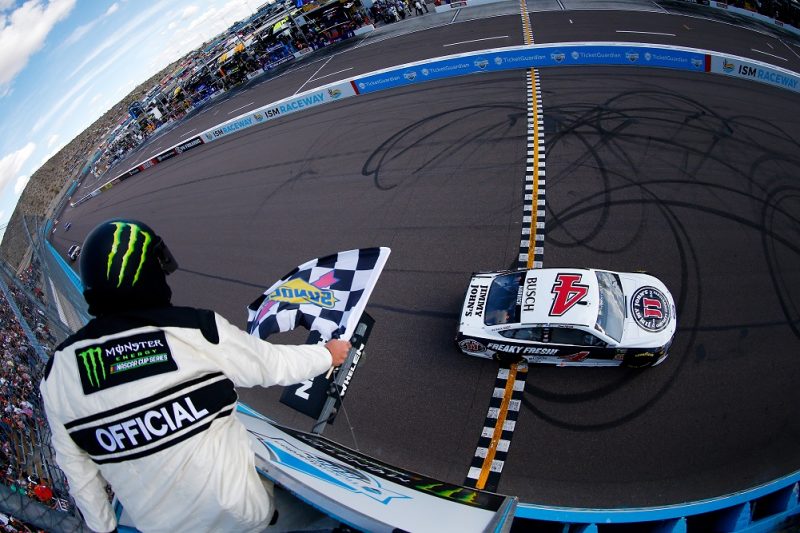 Kevin Harvick has won for the third race straight in the Monster Energy NASCAR Cup Series, this time taking line honours in Phoenix.

Harvick (#4 Stewart-Haas Racing Ford) did not dominate proceedings as he did a week earlier in Las Vegas but emerged at the lead after the completion of the final pit stops cycle with 22 of 312 laps remaining.

He had enjoyed one previous spell at the front of the field, from Laps 179 to 194 when he passed Kyle Busch (#18 Joe Gibbs Racing Toyota).

However, the pivotal move would come later in the race when he overtook Chase Elliott (#9 Hendrick Motorsports Chevrolet) for what was fourth position at the time.

Having raced without car chief Robert Smith for the first of two races after a post-Las Vegas penalty, Harvick was in a defiant mood in victory lane.

“I’ve been mad as all get out because this team does a great job,” he said.

“This organisation does a great job and we’ve got fast race cars, and to take that away from those guys just really p###ed me off last week.

“To come here to a racetrack that is so good for us is a lot of fun and everyone was just determined this week and we just wanted to just go stomp them.

“We didn’t stomp them, but we won. That’s all that really matters. Just proud of this team. Put a little fire in our belly.”

He lost time with a messy final pit stop with 53 laps remaining, but still managed to pass Denny Hamlin (#11 Joe Gibbs Racing Toyota) and then Elliott before the chequered flag.

Harvick’s win takes him back on top of the standings after dropping to third mid-week following his penalty, which team owner Tony Stewart indicated post-race would not be appealed.

Is this the pass for the win? @KevinHarvick gets by @chaseelliott, setting himself up to lead as pit stops cycle through. #NASCARGoesWest pic.twitter.com/QpU5P0MEtk