Andre Heimgartner has won the 2017/18 BNT V8s championship as Jack Smith took his first race win in the category at Hampton Downs.

Jason Bargwanna had provisionally been classified the Race 2 winner but two post-race penalties meant that Heimgartner’s title was a formality when the final race of the season started.

Lance Hughes (#84 Hamilton Asphalts Commodore) led the Class 1 field away in the reverse grid Race 3 but it was his Hamilton Motorsports team-mate Smith who was leading the charge through the Class 2 cars, which started at the head of the grid, after an early Safety Car.

Smith was at the very front after a second Safety Car, again for a car stopped on the side of the track, and subsequently gapped the field on his way to the chequered flag in the #85 Pilot Brewery Commodore.

“It’s been a while since I’ve won a championship and my first one since Formula Ford, so good to get that out of the way,” said Heimgartner.

“The weekend didn’t go as smoothly as I had planned. I had the issue yesterday where I lost the mirror so I was being a bit conservative. The wrong gear ratios were also in the gearbox, put in at the last rebuild, so we weren’t that quick.

“We battled with a few things over the weekend, but so glad to get it home and seal the championship.

“Coming here, the aim was to win the championship, and to have some good competition in the form of Nick Ross and Bargs does make the championship win that little bit more satisfying. 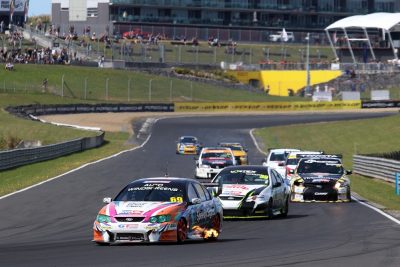 “I’ve been doing a lot of driving lately, and this mileage I’ve done here at home, definitely helped me in the first round of Supercars at Adelaide last weekend. Looking forward to doing more racing back here next season.”

Ross had earlier inherited the Race 2 win when Bargwanna, who had managed to hold out a train of three cars at the end, copped two thirty-second penalties.

The first was for contact with Ross himself and the second for punting Class 2 competitor Chelsea Herbert (#62 MTF Falcon), an incident which saw the 19-year-old into the infield and nearly taking out Bargwanna as she slid back onto the circuit.