Ford Supercars teams in no rush to replace Falcon

Ford Supercars teams in no rush to replace Falcon 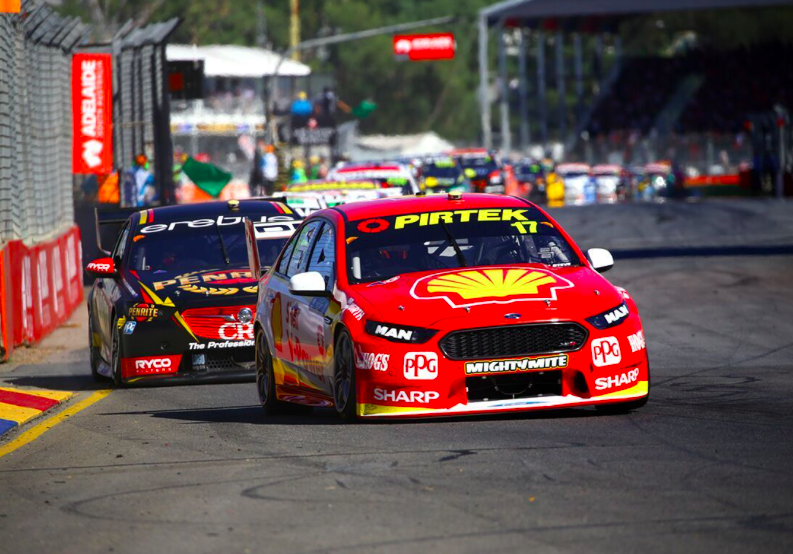 Ford Supercars teams Shell V-Power Racing and Tickford Racing are prioritising development of their Falcons to ensure the car remains competitive rather than focussing on homologating a new model for 2019.

The arrival of the new ZB Commodore sparked a parity debate at the Adelaide 500 with Ford teams claiming the Triple Eight developed car, featuring lightweight composite panels instead of factory OEM components, has an advantage over the field.

While the Holden has been developed in accordance with Supercars regulations, the leading Ford teams are already planning a proposal to Supercars to use composite panels on permitted areas of its cars.

The move arrives amid uncertainty regarding the form of the next Ford Supercar in the series, with the Falcon no longer in production in Australia.

The possibility of developing a Ford Mustang for 2018 had emerged with the Penske and Tickford operations collaborating on feasibility studies, but the project failed to gain the required support from the blue oval.

Triple Eight boss Roland Dane has urged the Ford squads to focus on moving to a new car rather than focus on improving the Falcon FGX ,which joined the championship in 2015.

However, Shell V-Power Racing managing director Ryan Story has confirmed that assurances have been sought from the category regarding the implementation of composite panels and work is underway to ensure the Falcon remains competitive.

Story say his team is focussed on continuing to work on improving the Falcon given the possibility that it will again compete in 2019.

“There is always a bit of work that goes in the background,” Story told Speedcafe.com, when asked if the squad is looking to re-homologate panels.

“It is a simple case of wanting to ensure that what we have been able to see in the implementation and execution of this new car (Holden) can be applied to the other cars in the championship.

“We have had that assurance and that is what we are working towards.

“We are extremely limited (in what we can do with composite panels) for sure just because of the nature of it, but we will do the best we can with what we have and see what it does for us.

“We have to ensure it stays competitive in the event that we are racing it in 2019.

“We have spoken at length at how these (new model) projects come to fruition, you need to have a willing manufacturer partner to make those changes and without that you are stuck with what you have.”

The view is echoed by Tickford boss Tim Edwards who also confirmed to Speedcafe.com that it will also attempt to re-homologate panels, but insists the Falcon FGX is still a competitive force in Supercars.

“We are always thinking about the future, what car, what driver and what mechanics, our whole life is around change and that is one of a number of things we are always focussing on,” Edwards told Speedcafe.com.

“We have just started our fourth season with that car. Had the Falcon still been in production in Australia we will still be racing that this year and potentially next year because a model normally has four or five-year life cycle.

“There seems to be this push that we should be racing Mondeos and Mustangs or whatever just because we cannot buy a Falcon in this market.

“It (the Falcon) is a competitive car and we still feel like we are in the hunt and we have still got more work to do.

“I’m not going to put it all down to the fact we haven’t got a composite roof, so that means we are not going to win a race.

“We have a firm belief in ourselves that we can do a better job and we will try and get some changes put through for our car, but that is one of a whole host of things we need to improve, which is separate to this talk about composite panels.”