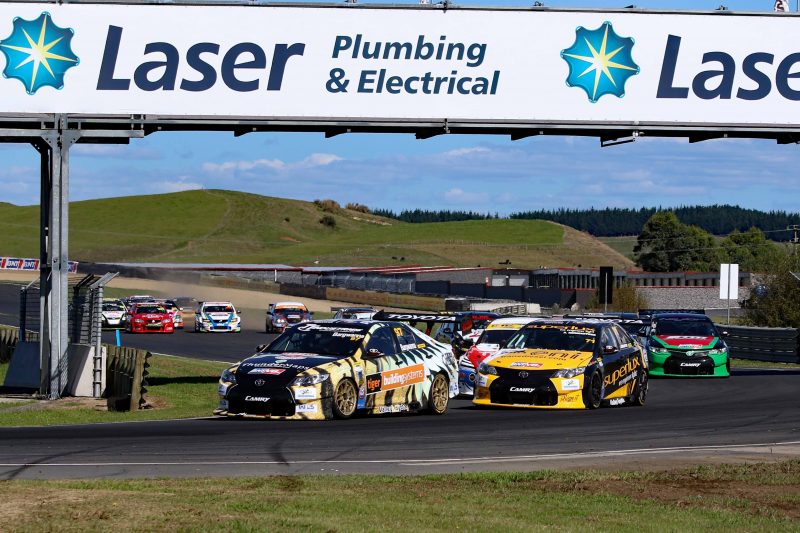 Jason Bargwanna leads the field away

Andre Heimgartner will take a slightly reduced championship lead into the final day of the 2017/18 BNT V8s season after Jason Bargwanna won Race 1 at Hampton Downs.

Bargwanna started from pole position in the #97 Tiger Camry and held the lead through the first corner as Richards Team Motorsport team-mate Heimgartner (#71 Superlux Camry) slotted into second.

Heimgartner applied pressure either side of an early Safety Car, when Justin Ashwell beached his #11 Digga Falcon (Class 2), but started to lose ground around Lap 6.

He dropped to fourth and came under pressure from Jack Smith (#85 Pilot Brewery Commodore), before finding a turn of pace around Lap 10, passing Lance Hughes (#84 Hamilton Asphalts Commodore) for third.

Bargwanna ultimately led all 14 laps to enhance his chances of overhauling his team-mate in the final two races of the season tomorrow.

“It’s one of those weekends where you have to do the best you can, and what will be will be,” said Bargwanna.

“At one stage I looked in my mirror and couldn’t see anyone, couldn’t see Andre and I thought, ‘This could be good.’

“We had to be very cautious early on as the track was breaking up everywhere. There’s not a lot of grip with the track temp not up so it would be easy to make a mistake.

“For me it was about controlling the pace and looking after the tyres for tomorrow.

“The goal for my weekend is to get two poles, and three race wins and the championship will take care of itself.  So far we are on track; let’s see what Sunday brings.”

Heimgartner was second, ahead of Hughes, and explained that he was actually taking an ultra-cautious approach to the race when he lost positions.

“My mirror folded in, so any time any of the others guys put their nose in I didn’t know,” he said.

“I ended up taking the wider line to give them room, even if they weren’t there.  It held me up a lot, but luckily the race fell back in my favour at the end.”

Heimgartner’s championship lead is now 61 points, having been 69 at the start of the weekend.