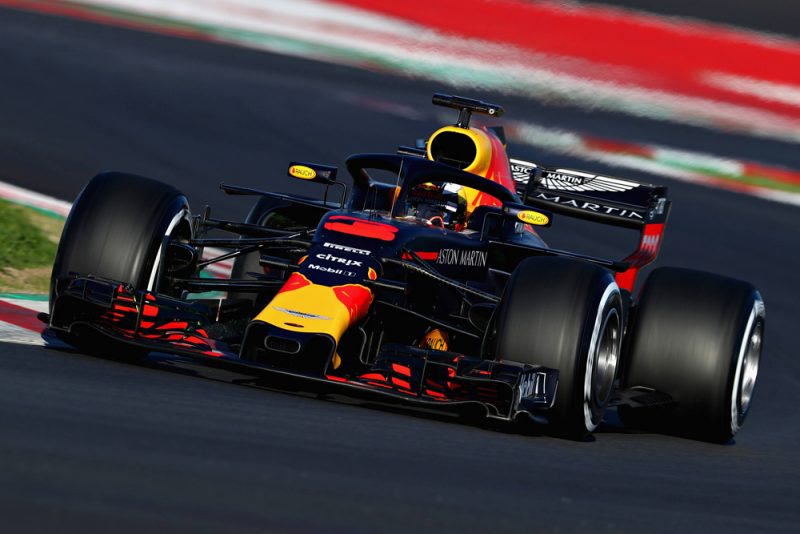 Daniel Ricciardo has blazed his way to the top of the Formula 1 testing timesheets with the fastest time of pre-season testing so far.

The Red Bull driver was nearly four tenths faster than Lewis Hamilton’s Mercedes, his 1:18.047s effort the fastest lap ever set around the current configuration of the Circuit de Catalunya.

Ricciardo also notched up 165 laps, proving the Red Bull is both fast and reliable.

“Today’s was an optimistic run plan and I didn’t think we’d get that much done but we got through all of it, so that was good,” Ricciardo said.

“It was a good bunch of laps today and I got a few quick ones in there, which was nice.

“The hypersoft tyre helped of course but we made some changes early this morning and after some medium runs then we went to the softer tyres and the changes we made seemed to help the car so there was just a bit more confidence and the track was a good temperature today so we could start to get some real testing in.

“It was OK; I would have liked to get into the 17s, but we’ll save that for the racing. In terms of the shape we’re in, I think we’re getting there, we’re in a decent place.”

Mercedes opted again to run both drivers, with Hamilton and Valtteri Bottas chalking up a combined 175 laps.

It was a day filled with plenty of running, as Sauber banked 160 laps with Charles Leclerc, Renault recorded 190 laps between Nico Hulkenberg and Carlos Sainz, and Williams took in 143 laps with its duo of Lance Stroll and Sergey Sirotkin.

Only Haas and McLaren failed to reach triple figures, with Fernando Alonso stopping on track with an oil leak which saw the team opt for an engine change, losing out on some six hours of running in the process.

“It’s a shame we lost track time today due to another time-consuming issue. However, in many ways I’m glad these problems are occurring now – in testing – as this is exactly why we’re here,” said McLaren’s racing director Eric Boullier.

“These are the days when we need to ensure all bases are covered and all processes analysed.

“We’re working with a completely new package for 2018 and it’s inevitable that problems such as these will occur, but of course it’s frustrating that such issues are both so visible and so lengthy to rectify.”

Haas was also sidelined with an oil leak, with saw Romain Grosjean sitting out much of the afternoon’s session.

The day ended with a simulation of a standing restart following a red flag, which was first trialed at the end of Tuesday’s running.

Testing continues tomorrow, the penultimate day of pre-season testing, ahead of teams sending their cars to Melbourne for the opening race of the year later this month.