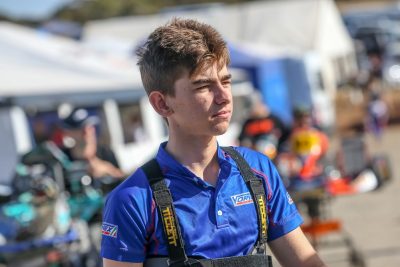 KA2 national champion Broc Feeney will make an early circuit racing debut in this weekend’s final round of the Toyota 86 Championship in New Zealand.

Feeney, who will drive the 2016 series-winning car in Australia’s Toyota 86 Racing Series this year, will drive the #93 Neil Allport Motorsport entry at Hampton Downs.

The 15-year-old has also stepped up to the KA1 class of this year’s Australian Kart Championship, finishing third in the final at Monarto last month.

“The opportunity is a unique one; I didn’t expect to be making my car racing debut in New Zealand,” said Feeney.

“The chance to drive with Neil Allport Motorsport in the New Zealand Toyota 86 Series season closer came about unexpectedly and one that will give me a whole heap of experience ahead of starting the Australian Series in April.

“It has been busy in getting the car ready for the Australian series, along with racing the opening round of the Australian Kart Championship, where I finished third, so it will be nice to have a new experience this weekend at Hampton Downs and use it to advance my understanding of racing in cars and approaching new tracks.”

The Queenslander’s weekend begins with practice on Friday before qualifying and three races across Saturday and Sunday.

Round 2 of the AKC takes place at Albury-Wodonga on April 13-15, a week before the Toyota 86 Racing Series opener at the WD-40 Phillip Island 500.