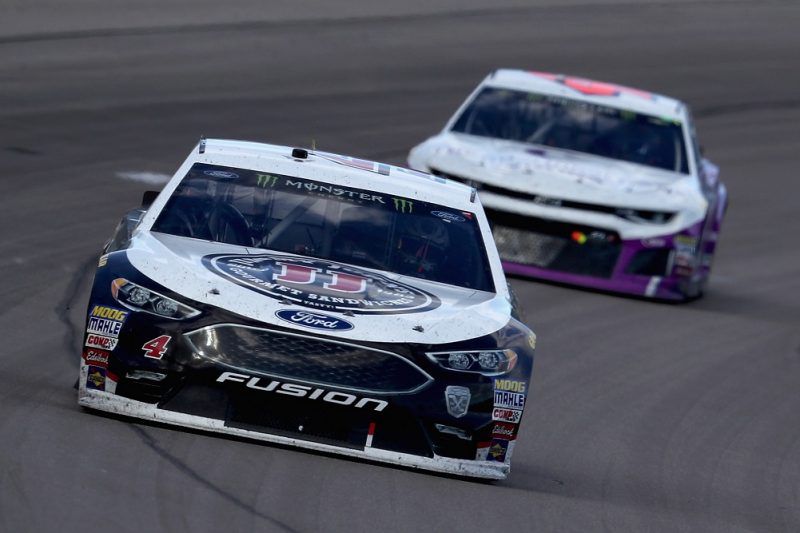 Officials handed down the penalty after finding that the #4 Stewart-Haas Racing Ford failed to have rigid rear window glass and also possessed a non-aluminium rocker panel extension.

Crew chief Rodney Childers has been fined $50,000 and car chief Robert Smith suspended for the next two races.

Harvick will not be able to use the dominant win, namely seven playoff points for winning the race and both stages, for the purpose of the Playoffs, but had already qualified by virtue of his win a week prior in Atlanta.

He as a driver and SHR as car owner also both lose 20 points for the Level 1 breaches.

Childers had argued that the bend in the roofline and rear windscreen which occurred at speed was inadvertent.

“We had a rear window brace fail,” he told Sirius/XM NASCAR Radio.

“NASCAR mandates that we run a certain T-bar in the back glass and that T-bar is actually pretty strong.

“The centre brace that holds that T-bar is what bent and failed and the T-bar ends up being stronger than the back of the roof at that point and it pulled the roof down.

“It’s not something that we wanted to happen.”

The penalty, which the team may appeal, sees Harvick drop from the series lead to third and restores Joey Logano on top of the table.

Harvick is the latest front-running entry to fall foul of officials after Martin Truex Jnr and Jimmie Johnson lost their car chiefs and were sent to the rear of grid for pre-race technical inspection failures at Atlanta and Las Vegas respectively.

Next Story Harvick goes three in a row with Phoenix win