An impressive debut from the new Holden ZB Commodore at the Adelaide 500 is a ‘worrying sign’ according to Ford squad Tickford Racing as they look to bridge the gap to the front.

Its performance even triggered a debate regarding weight parity between the Commodore and the Falcon, led by Ford teams Shell V-Power Racing and Tickford Racing. 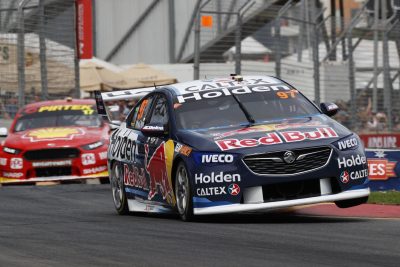 While not prepared to wade into the parity debate Tickford boss Tim Edwards admitted the speed on debut from the new Holden is a concern with teams still yet to fully understand the new car.

Triple Eight team manager Mark Dutton believes his team still has plenty to learn about the car having only scratched the surface of its potential, which will compound the fears from the blue oval camp.

“I’m not going to think about the parity argument. We will focus on what we can influence and are in our control,” Edwards told Speedcafe.com after his squad scored a best finish of fourth on Sunday with Chaz Mostert.

“I would have liked to have come out and beaten them because you would have thought that it being the first race with the ZB Commodore they would be slightly on the back foot as they try to understand a new car.

“We have just got to find more pace.

“Albert Park (the next round of the championship) will be different again, it is a very different circuit to Adelaide.

“Unfortunately it may suit the Holden more than us because of the nature of the corners there. We are not going to give up and push as hard as we can to get back on top.”

The view is echoed by the reigning teams’ champions Shell V-Power Racing, which achieved a third place finish, courtesy of Scott McLaughlin, as their best result up against the new Commodore managing director Ryan Story has labelled a ’rocket ship’.

“Oh man, have we got some work to do,” said Story after the race.

“Full credit to the guys next door (in pitlane), they have developed a rocket ship.”

The Virgin Australia Supercars Championship heads to the Formula 1 Australian Grand Prix at Albert Park for its second round from March 22-25.

Next Story GALLERY: Corner by corner of The Bend Supercars circuit