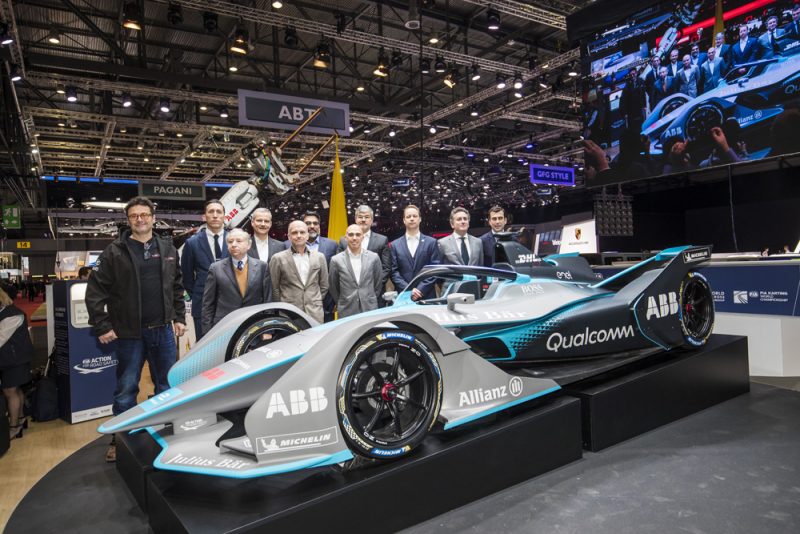 The second generation Formula E car has been officially unveiled at the Geneva International Motor Show.

“This is the first time I’ve seen the complete car in the flesh and it’s even more sleek and spectacular up close,” said Agag.

“If you were to draw a racing car from scratch and base it purely on its looks, you’d come up with just this design.

“This model visually differentiates Formula E from any other single-seater in motorsport today. When people see this car they will say it’s Formula E, it’s the future.”

“It’s incredible to see the progress made in just four years – to double the range of the car and increase the power output is a fantastic achievement,” said Todt.

“With the support of so many manufacturers, Formula E will continue to push the development of electric vehicle technology, and this car is an important milestone in this journey.”

Weighing 900kg, the Gen2 car will boast a top speed of 280km/h with the equivalent of 270bhp in race trim, which can be increased to 335bhp in qualifying.

It will run on new, 18-inch Michelin Pilot Sport all-weather tyres which are lighter and create less rolling resistance than the current tyres.

Set to be introduced for the 2018/19 season, the car will be the first capable of running the full duration of a Formula E race, eliminating the need for a mid-race car change.

Details of the 2018/19 season are yet to be confirmed, though Nissan has confirmed its participation.