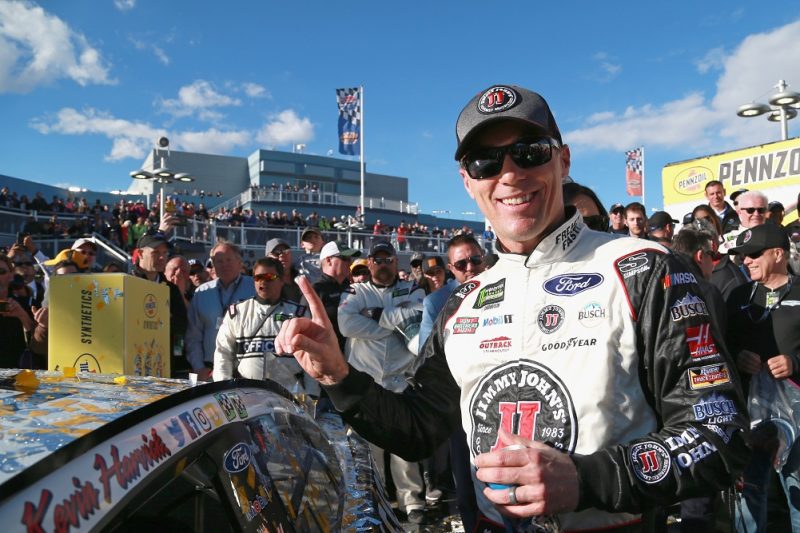 Kevin Harvick has notched up his second straight NASCAR win with an even more dominant performance in the Pennzoil 400 presented by Jiffy Lube at Las Vegas Motor Speedway.

Harvick (#4 Stewart-Haas Racing Ford) led 214 of the 267 laps and was virtually unstoppable in each of the first two stages, while Kyle Busch (#18 Joe Gibbs Racing Toyota) and Kyle Larson (#42 Chip Ganassi Racing Chevrolet) made up the top three.

Harvick started on the front row, took the lead on Lap 2, and but for a round of pit stops led all the way to the end of Stage 1 on Lap 80.

He continued the pattern in Stage 2, gapping the field when out in front and only trailing for a handful of laps after a green flag pit stop.

However, Harvick faced a greater challenge in the final stage when he was fourth off pit lane for the restart as Joey Logano (#22 Team Penske Ford) took over at the front.

The first unscheduled Caution came on Lap 177 when Jamie McMurray (#1 Chip Ganassi Racing Chevrolet) hit the wall exiting Turn 2, at which time Martin Truex Jnr (#78 Furniture Row Racing Toyota) assumed the lead when he went against the grain and chose to not pit.

Truex Jnr quickly fell down the order at the restart, but it only took a lap for the next Caution when Kurt Busch (#41 Stewart-Haas Racing Ford) got loose and took Chase Elliott (#9 Hendrick Motorsports Chevrolet) into the wall with him.

What would be the final restart took place with 73 laps remaining, at which time Logano led from Harvick, but those positions soon reversed.

Harvick quickly gapped the field by a couple of seconds and, but for the final round of pit stops, cruised home for his second win in three full points-paying races this season after taking a comprehensive victory a week earlier in Atlanta.

Larson ended up a distant third ahead of Truex Jnr and Blaney.

Jimmie Johnson (#48 Hendrick Motorsports Chevrolet) battled to 12th, having dropped almost two laps down before getting the free pass at the final Caution.

The seven-time Cup Series champion lost car chief Jesse Saunders and was put to rear of grid for the start after his car failed pre-race inspection three times.

Denny Hamlin (#11 Joe Gibbs Racing Toyota) took the chequered flag two laps down in 17th, having been penalised midway through Stage 2 for speeding into pit lane.

Harvick has taken over at the top of the standings, one position ahead of previous leader Logano, heading to the TicketGuardian 500 this weekend (March 9-11 local time) at Phoenix International Raceway.

Kurt Busch has a moment and takes Elliott with him

Harvick speaks about his strong start to the year