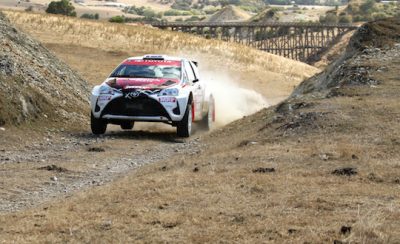 Harry Bates has started the 2018 CAMS Australian Rally Championship in dominant fashion as he won both heats of the Courier Eureka Rally.

Molly Taylor, on the other hand, sits fifth in the standings after hitting a kangaroo and picking up a flat tyre.

Bates and co-driver John McCarthy were all but unstoppable in Sunday’s Heat 2, winning the latter six of seven stages in the Toyota Genuine Parts Toyota Yaris AP4.

In Saturday’s Heat 1, they topped five stages and led at the end of all eight.

The result represents the first round win for the AP4 Yaris, the introduction of which cruelled Bates’ 2017 title hopes when it suffered significant teething problems at Rally SA.

“Coming here and winning 11 out of 15 stages certainly exceeded our expectations,” said Bates.

“If I could have come here and just won a few I would have been happy, so it’s been sort of a dream weekend I guess.

“The plan now would be to do some more testing with the car between now and WA (Round 2).

“As far as my driving goes I think I need to work on a couple of areas, but moving forward if we carry this momentum we can keep improving and keep finding more pace.”

Taylor clawed her way back from a low of 11th due to a flat tyre to end Saturday in fifth position.

On the Sunday, she hit a kangaroo in the Subaru do Motorsport Subaru Impreza WRX Sti (P5), damaging the power steering.

Taylor, who had won the morning’s opening stage, persevered to the lunchtime service where repairs could be effected, salvaging sixth for the day and fifth for the round.

Steve Glenney finished second on both days, having switched duties from being a navigator to drive in an ARC event for the first time in a decade.

On the Sunday, Glenney was second by 27.8s and tied the final stage with Bates.

He was never outside the overall top three on either day.

Eli Evans ended up third for the round in the Tankformers Mini Cooper AP4, having taken a stage win on his way to third in Heat 1 before finishing fourth in Heat 2.

Lewis Bates was fourth and fifth in the respective heats to leave Ballarat fourth in the championship in the Neal Bates Motorsport Toyota Corolla S2000 previously driven by father Neal and brother Harry.

Round 2 of the Australian Rally Championship is the Make Smoking History Forest Rally in Busselton, Western Australia on April 27-29.

It was a breakthrough round win for Harry Bates and the all new Toyota Yaris AP4, claiming back-to-back wins at The Courier Eureka Rally.

Championship points: After Round 1 (Top 10)

Next Story Peugeot steps up World RX program in 2018