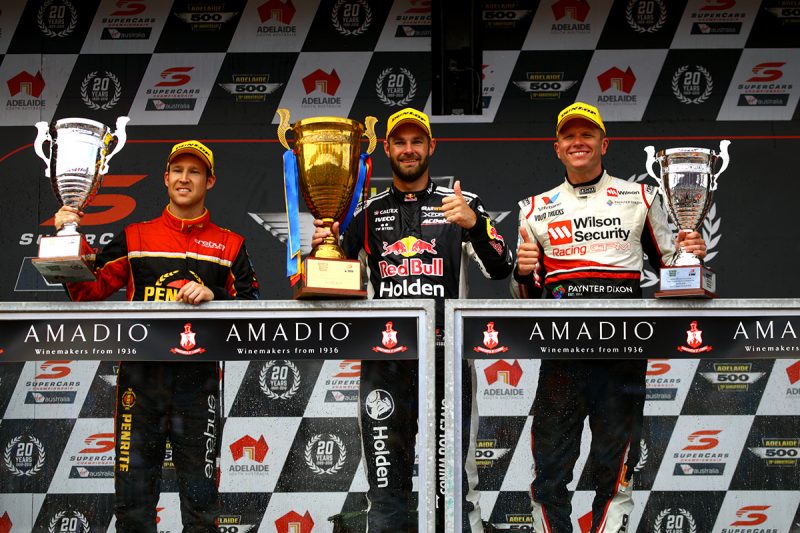 The pole-sitter was forced to follow Whincup for the first half of the race before a gearbox drama for Car #1 saw van Gisbergen inherit the lead on lap 31.

Van Gisbergen briefly lost the advantage after the second round of pit stops to Erebus Motorsport’s David Reynolds before retaking the lead at Turn 9 as the race entered the final third.

Reynolds stayed in touch with van Gisbergen with the lead hovering around the second mark until the chequered flag.

A puncture for McLaughlin took the Shell V-Power Racing Ford out of third on lap 26 and he was left to fight back to 10th, after being forced into a three stop race.

Whincup reacted best at the start to lead pole-sitter van Gisbergen to the Senna chicane, while McLaughlin followed with Mark Winterbottom in fourth.

The reigning champion seemed to have the edge over his team-mate van Gisbergen and rejoined in the lead with a 10 second advantage after the first round of pit stops.

Van Gisbergen ducked into the pits early in the race along with Winterbottom, James Courtney and Will Davison, the latter two pitted on the first lap having been languishing in the mid pack.

Despite a messy stop, van Gisbergen emerged ahead of Winterbottom and Courtney in a net second position.

McLaughlin held third after taking service but his race was soon dealt a blow when the Kiwi suffered a right front puncture at Turn 9, believed to have been caused by debris.

The issue fell well before the critical lap for refuelling to get home.

However, worse was to unfold for the race leader when Whincup suddenly slowed with a transmission issue.

He managed to crawl back to the pit lane before combination of marshals and team crew pushed the car back to the garage.

Amazingly, it proved to be his first retirement in 137 Supercars races.

“Fast car, we were under control. Gearbox temp was going up and up and up,” said Whincup.

“We could see it coming but nothing you can do, you just got to keep pressing on and then bang, no drive.

“Unfortunate, it’s the one that got away but that’s motorsport I guess.”

This handed team-mate van Gisbergen the lead from Winterbottom, Courtney, Reynolds and Tander.

Reynolds briefly emerged in the lead after the final round of stops but it was short-lived as van Gisbergen dived underneath the Erebus driver, who offered little in response, to grab the effective lead at Turn 9.

The pair were hotly pursued by Tander, who jumped Winterbottom after his final stop.

However, Winterbottom was the next of the lead group to hit trouble after he incurred a pit lane penalty for kerb hopping, much to the bemusement of the driver and team.

He rejoined the race in 13th spot after the visit to pit lane, where he would ultimately finish.

Van Gisbergen came under pressure from Reynolds in the final laps but refused to buckle under the pressure on the way to the chequered flag.

Tander followed the pair home in third ahead of Tickford Racing’s Chaz Mostert, who spent the majority of the race inside the top 10.

The Supercars Championship will continue at the Rolex Australian Formula 1 Grand Prix from March 22-25.