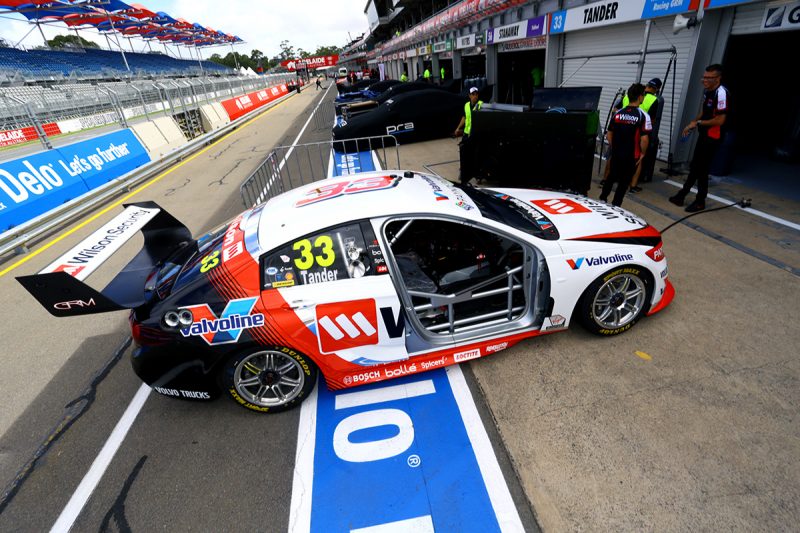 The use of lighter composite panels in the new Holden ZB Commodore has raised concerns among Ford and Nissan Supercars teams who wish to address a perceived imbalance.

Teams aired their views following a successful race debut for the Triple Eight homologated ZB Commodore in Adelaide that saw the model take pole position, the win and fastest lap.

While the Commodore meets the minimum weight criteria (1410kg including driver) set by the category, lighter composite panels present an opportunity to reduce the centre of gravity of the car by transferring the weight into the floor using ballast.

Reducing the centre of gravity of a race car lessens body roll and improves a car’s weight transfer and tyre wear.

According to the Supercars operations manual, front guards, all doors skins (minus the driver’s door), and rear quarter panels can be made from composites.

Shell V-Power Racing managing director Ryan Story believes the ZB Commodore has set a precedent for the rest of the paddock to now follow.

Story says his team will look to address the issue with the assistance of Ford’s homologation team Tickford Racing.

“We’ve become aware of it over the course of the past week and it’s something you need to address.

“At the end of the day, centre of gravity is king in any race car so it’s something we need to address and do so as quickly as we can to ensure that we address a modest imbalance.

“I think a precedent’s been set with some of these panels, and if we’re going down the path of ensuring that we have parity, we just need to ensure that what’s good for the goose is good for the gander, and the series know that.

“I think we’ll see that we have the ability to fast-track and ensure that we’re all on the same page and do so as quickly as we can.

“We’re not ultimately responsible for it as the homologating team, but it’s something that we’re pushing for and we work very, very closely with Tickford as is well known.

“That’s something that we’ll work together on and do as quickly as we can, as best as we can.

“But the onus is on us to do it, and I think that we’ve got the support of the technical department to do that, given that, again, what we’ve seen with the other car (ZB Commodore), we just need to make sure that we have the same opportunity to do the same thing.”

“I think there’s certainly a few weight issues that we need to work through with Supercars. That’s what we’ll do,” said Edwards.

“As (the) homologation team, you submit a proposal to Supercars and say ‘we’d like to change that to a composite part’.

“They evaluate it, they say ‘oh yeah, there’s no performance advantage to that’ and they’ll approve it and it becomes a phased in part from then.

“That’s just an example of the kind of running changes that get made by all teams, or all manufacturer teams throughout the course of the season.”

Nissan Motorsport is in the same position as the Ford squads with team owner Todd Kelly concerned that rival manufacturers may have to outlay extra funds to keep up with Holden.

“It’s not a very smart idea if a car comes in with lighter panels, so the rest of the category has to spend a heap of money to match it,” said Kelly.

“That’s the reverse of what it should be. It would be great to make these cars lighter, but that would be at great expense to the other manufacturers and other teams if we need to do that.

“It’s not the right thing for the incumbent manufacturers to have to change to something that’s just turned up.”