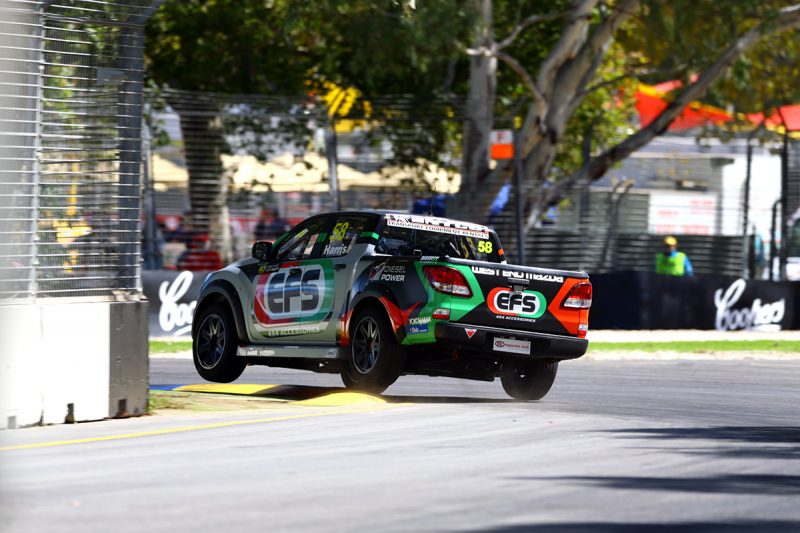 Ryal Harris has come from seventh on the starting grid to win the final race of Round 1 of the ECB SuperUtes Series at the Adelaide 500.

Harris, who failed to finish Race 2 with a crew-induced technical issue, took the lead from eventual round winner Craig Woods on Lap 2 and held sway for the rest of the eight-lap encounter.

Woods and Tom Alexander started on the front row by virtue of round points to that point and while the latter was ahead through Senna Chicane, Woods got underneath the New Zealander at the end of Wakefield Street.

Harris wasted no time slicing his way through to third in his Peters Motorsport Mazda BT-50 as those around him rubbed panels in the opening corners.

Alexander put his Ross Stone Racing Holden Colorado past Woods at Turn 4 on Lap 2, before Woods attempted to reclaim the position at Turn 9.

He drove his Western Sydney Motorsport Toyota Hilux down the inside but carried both well wide and Harris seized the lead.

The three-time V8 Ute Racing Series winner soon had a two-second margin while Alexander ended up pitting with a technical issue.

The top two of Harris and Woods ran their own races to the chequered flag as attention turned to an emerging battle for third.

Aaron Cameron in the other Peters BT-50 had started eighth and moved up to fourth by the halfway mark.

He then tailed Toby Price (Sieders Racing Team Mitsubishi Triton) for multiple laps but the 2016 Dakar winner looked to have enough to hold on to a third-place finish.

However, Price slid wide at the last corner of the race and while Cameron had carried a lock-up into the braking zone, he made the right-hander and took over the position as they entered the main straight.

Alexander and Ben Walsh (Western Sydney Hilux) were retirements from the race.

Woods’ consistency in the form of a trio of second placings earned him the round win and series lead, from Price and Harris, heading to the Winton SuperSprint for Round 2 on May 18-20.