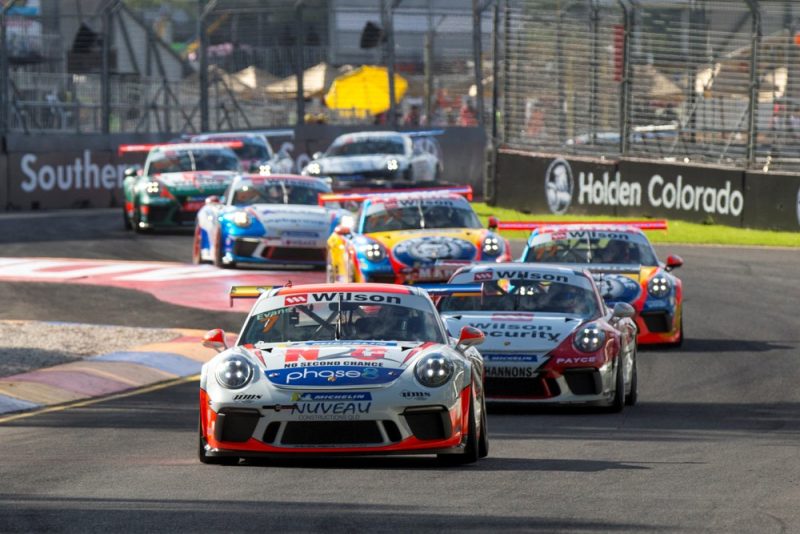 Another composed performance from Jaxon Evans has seen him claim his second Porsche Wilson Security Carrera Cup Australia victory of the weekend at the Adelaide 500.

A lightning start from Evans off pole saw Saturday’s race winner able to move across and cover David Wall on approach to the Senna Chicane while further back Michael Almond moved up to third.

Midway around the opening lap Leanne Tander found the fence on the inside of Turn 8, ending her race and drawing the Safety Car.

Marc Cini was also off the road after contact with Dean Cook at the final turn, pulling his car to a halt on the outside of the final turn.

The Safety Car withdrew at the beginning of the sixth lap, Evans quickly moving his McElrea Racing Porsche a second clear of the chasing pack.

In second, Wall came under pressure from Almond at the head of a four car battle for the second podium place.

Their dice was cut short however when the race was called two laps early, leaving Evans to claim his second win of the weekend over Wall and Almond.

Roger Lago sealed another Pro-Am class win, Max Twigg on his bumper to claim second in class and Adrian Flack rounded out the class podium.

After the opening round, Evans holds a 24 point lead in the series standings from Wall, with O’Keeffe a further 18 points back in third.

Lago enters round two with a 30 point lead in the Pro-Am standings over Twigg, with Grove a further six points adrift in third.

The Porsche Wilson Security Carrera Cup Australia series lines up next at the Formula 1 Australian Grand Prix on March 21-24.

Next Story No excuses for O'Keeffe after Adelaide