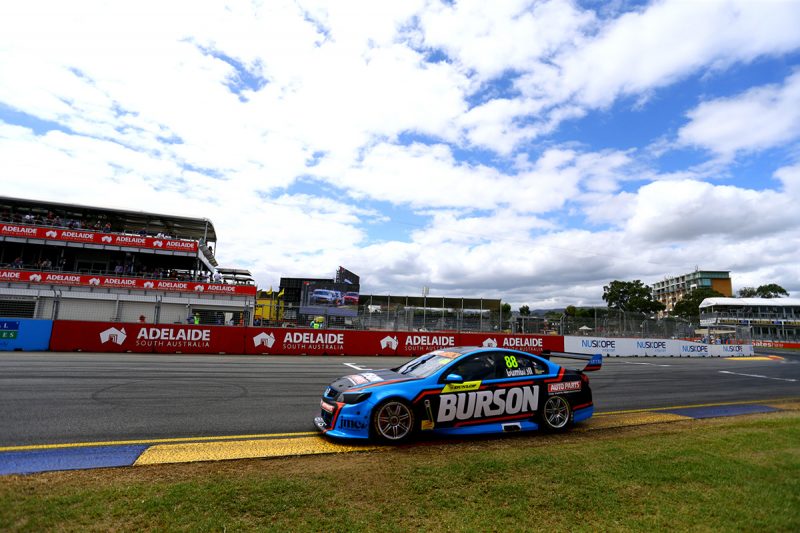 Paul Dumbrell has taken his second race win and with it round honours in the opening weekend of the Dunlop Super2 Series in Adelaide.

Dumbrell won the start and ran his own race at the front of the field, while Race 2 winner Garry Jacobson picked up another second placing and Will Brown finished third.

While the #88 Eggleston Motorsport VF Commodore launched well from the inside of the front row, Jacobson had Kurt Kostecki and Shae Davies either side of him for the run to Senna Chicane.

Davies emerged in second, but only until Turn 9 when Jacobson put the #26 MW Motorsport Nissan Altima down the inside.

Front the first dozen or so laps, the split between Dumbrell and Jacobson mostly fluctuated around the one second mark.

Jacobson, who had already survived a scrape with the wall at Turn 8 on the first lap, lost ground after whacking the Turn 1 tyre bundle.

He still looked like recovering and making a late challenge, until the gap grew to 1.7s by the end of the 19th and final lap.

Will Brown made it two Eggleston Motorsport VF Commodores in the top three, albeit 11s behind his team-mate, having pulled off an aggressive move past Davies on Lap 2 and then picked off Kurt Kostecki mid-race.

Kurt Kostecki led cousin Brodie in a pair of Kostecki Brothers VF Commodores to fourth and fifth, the former finishing on the round podium for the first time and the latter bagging a personal-best race result.

Macauley Jones (#14 Brad Jones Racing VF Commodore) emerged on top of a willing scrap in the back half of the top 10, even though Dean Fiore crossed the finish line in sixth position.

Fiore (#23 MW Motorsport Nissan Altima) was issued a 15-second time penalty for turning Shae Davies around at Turn 9 on Lap 11.

The incident became far more costly for Davies when Zane Goddard arrived at the scene and rode up on the left-rear wheel of the #67 Paul Morris Motorsport FGX Falcon, causing terminal damage.

Alex Rullo, who started 19th after copping damage in Race 2, was 11th after he too incurred a time penalty.

The Super2 returnee had five seconds added to his race time, costing him a top 10 finish, after a bump and run to pass Tyler Greenbury (#13 Matt Stone Racing VF Commodore).

Bryce Fullwood ended up 19th after having to serve a drive-through for excessive kerb use at Senna Chicane in the #16 Matt Stone Racing FGX Falcon.

Adam Marjoram was a non-starter with his #15 Image Racing VF Commodore too damaged after a hit at Turn 8 in Race 2.

Round 2 supports the Tyrepower Tasmania SuperSprint on April 6-8.

Next Story Kostecki trio set to shine in 2018 Super2 Series