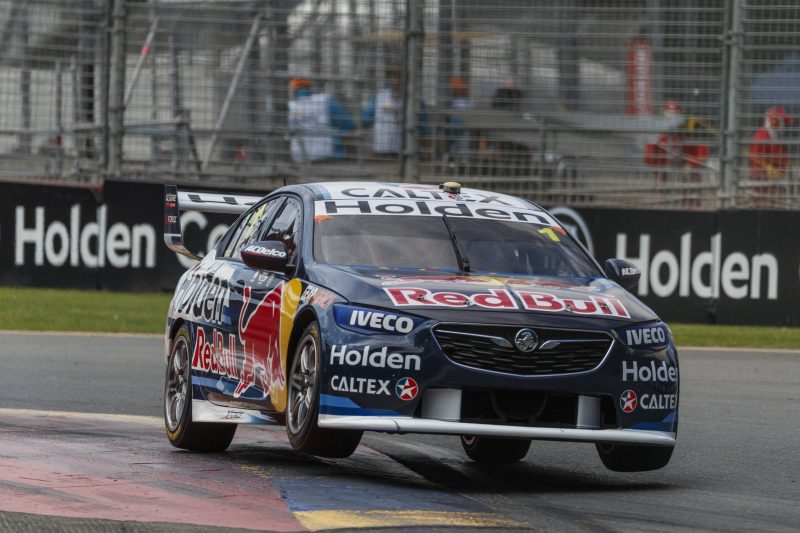 Jamie Whincup admitted he was lucky to haul his repaired Red Bull Commodore to the finish in the opening race of the 2018 Supercars season at the Adelaide 500.

The reigning Supercars champion persevered to finish sixth in Saturday’s 78 lap race despite encountering issues with his car following an overnight rebuild.

Triple Eight worked until 4am to repair the #1 ZB Commodore following a heavy impact with the wall at Turn 8 in Friday qualifying.

While the car was good for a fifth position start, Whincup had to battle a range of problems with his car that developed during the race.

The extent of the problems had Whincup fearing that he would fail to make the finish.

“The car was good, alright in quali, but 10 laps in there was smoke coming in, things started to get a bit hard work,” said Whincup.

“The end of the race couldn’t come quick enough. I was just trying to get to the end.

“Ten laps in I thought if things kept deteriorating as they did we wouldn’t make it. Sixth is a good result for us.

“The steering rack went really stiff, and a lot of smoke coming in the cabin because it’s not sealed properly because the whole side of the thing’s just been tapped out by a hammer.

“We had a radio issue as well. Things that have copped a few Gs from the crash started to fail as the race went on.

“We’re happy with sixth, to be honest, with everything that went on.

“Unfortunately it’ll be another big night, but I’m confident we’ll get it sorted.”

The two cars made contact while Reynolds, who came from a long way back, attempted a pass down the inside of Whincup pitching the #1 Holden into a spin.

Stewards investigated the incident but took no further action.

“I don’t know what happened with Reynolds, I haven’t spoken to him, but it had nothing to do with our race,” Whincup added.

“We could’ve maybe come fourth or fifth but we had big contact with Reynolds.

“I’m assuming I turned in on him, but I was having my own little battles inside the car so I wasn’t sure.

“I’ve got no opinion on that. Obviously the stewards have seen it and it’s probably my fault.”