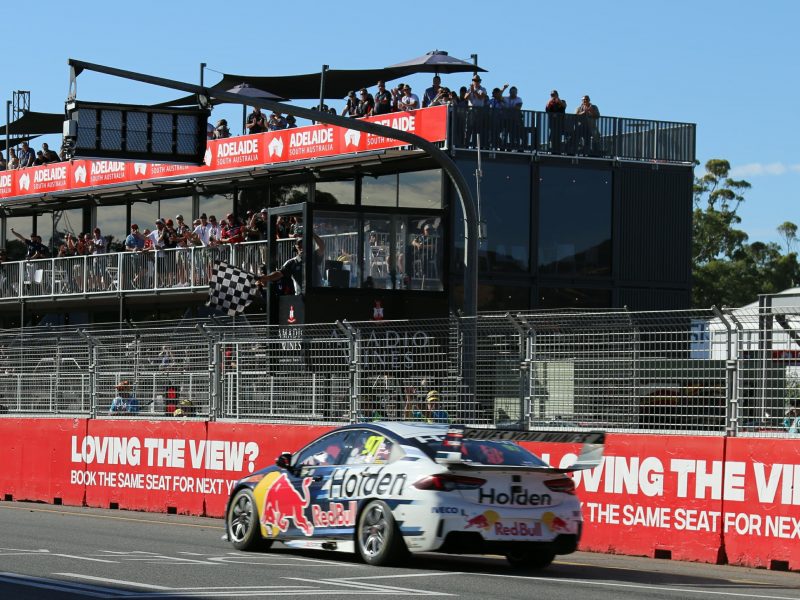 Shane van Gisbergen kicked off the 2018 Supercars Championship with an impressive victory in an eventful opening leg of the Adelaide 500.

The pole-sitter appeared on course for a relatively comfortable victory after emerging in the lead following the second round of pit stops.

However, his run to the chequered flag was hampered by three Safety Car periods in quick succession after 52 laps of green flag running.

Van Gisbergen dropped to third at the start but a longer first stint coupled with strong pace from the new ZB Commodore helped put him back in command as the race headed into the final stages.

The Kiwi claimed his third straight pole-to-win in Adelaide as he recorded the first win for the new Holden.

“What an awesome day. Thanks so much to the Red Bull Holden Racing team, the new Commodore is awesome, one-two for the new car,” said van Gisbergen.

McLaughlin got the jump at start as he propelled his Falcon into the lead while van Gisbergen dropped to third behind a fast starting Courtney.

Meanwhile, Mark Winterbottom leapt up to fourth as Jamie Whincup slid from fifth to seventh.

McLaughlin was unable to open up an advantage in the first stint and found himself chasing Courtney, who emerged in the lead courtesy of a shorter stop for fuel than the Shell Ford.

After inheriting the lead van Gisbergen elected to stay out much longer than his rivals, before eventually taking on fuel and tyres.

A longer stop saw the Kiwi take on 76 litres and return in an effective fifth position.

However, he was on a march once he rejoined the track passing team-mate Whincup before latching onto the tail of Winterbottom and then taking third spot at Turn 5.

At the front, Courtney continued to lead McLaughlin by a margin of four seconds.

All eyes were drawn to the battle for fifth which saw Reynolds and Whincup make contact at Turn 9.

Reynolds dived down the inside of Whincup from a long way back before he tipped the champion into a spin.

Stewards elected to take no further action following a review which left Reynolds in fifth while Whincup dropped to seventh.

Van Gisbergen made the most of a strong second stint to emerge in the lead following the second round of stops.

The #97 rejoined the race with a two second advantage over Courtney with McLaughlin dropping further back in third.

Reynolds managed to jump Winterbottom in the stops to secure fourth, while Whincup rejoined in sixth for the final stint.

The race was neutralised on lap 52 when officials deployed the Safety Car for debris on track at Turn 4.

Racing resumed but it was short-lived as two separate incidents saw the re-emergence of the Safety Car.

Fabian Coulthard, who was occupying 19th, broke his front left after contact with Tickford Racing’s Richie Stanaway at the final corner. He would go on to finish in 21st position.

Moments later Stanaway was caught in an incident with James Golding and Todd Hazelwood at Turn 5 that saw the Stanaway and Golding in the barriers.

All three returned to the pits with Stanaway and Hazelwood, the latter two eventually rejoined the race.

However, prior to that a melee broke out at Turn 9 when Garth Tander hit Craig Lowndes, who then speared Cam Waters into a spin.

The Safety Car was called again when Tim Blanchard found the infamous Turn 8 wall having appeared to have been bumped by Nissan Motorsport’s Simona de Silvestro.

The final 16 laps of the race ran without stoppage as van Gisbergen opened up healthy lead over Courtney to the chequered flag with McLaughlin in third.

Reynolds brought his Commodore home in fourth ahead of Winterbottom, Whincup and Chaz Mostert, who enjoyed a relatively lonely race.

Will Davison held off a charging Craig Lowndes in what was a spirited battle for eighth, while the top 10 was rounded out by Scott Pye (Walkinshaw Andretti United).

Lee Holdsworth crossed the line in 10th spot but was issued a five-second time penalty for bumping Tander at Turn 14 earlier in the race that dropped him to 13th position.

Rick Kelly was classified 23rd after incurring damage to the right rear of his Nissan Altima on the opening lap at Turn 3 that saw him spend time in the garage.

Blanchard, Golding and Stanaway, who stopped on the last lap, were the only retirements from the race.