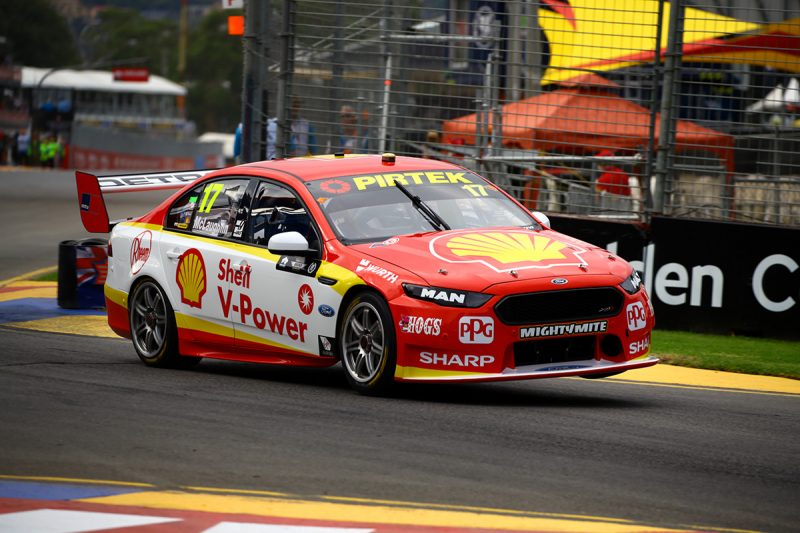 Scott McLaughlin topped the final practice session ahead of the opening race of the Adelaide 500, pipping Shane van Gisbergen in the closing moments.

The DJR Team Penske driver recorded a 1:19.8117s lap as van Gisbergen fell to fourth after late efforts saw Mark Winterbottom and Will Davison improve after the chequered flag.

As the session opened, McLaughlin put his DJR Team Penske Falcon fastest, immediately improving on that effort in an early qualifying simulation.

He book-ended the session with another simulation ahead of the Top 10 Shootout for today’s race, improving on his earlier best by  0.7s.

“The car feels a lot more comfortable underneath me and we tried a few things before qualifying yesterday but weren’t game enough to put them on for qualifying,” said McLaughlin.

“We just wanted to get in the shootout. Tuned her up over night and yeah, she’s a jet.”

A long night at Red Bull saw Whincup out on track despite his heavy Friday shunt, the seven-time champ wasting no time in getting up to speed.

“I would’ve loved to have gone easy through Turn 8, but I’m like ‘no you gotta get back on the horse’ so, lap one, hooked in nice and hard like I normally would.

“I just pride myself on not letting anything like that slow you down, you just got to keep pushing forward.”

Tickford Racing pulled a rabbit out of a hat to get Cam Waters back on track for qualifying yesterday, though his car carried battle scars after he too found the wall at Turn 8 on Friday.

With the final repairs completed last night, Waters banked a 1:20.4859s as he ended the session just outside the top ten.

Team-mate Mark Winterbottom languished down the order until late in the session, when he recorded a 1:19.9182s to jump from 19th to second.

His time pushed Will Davison down to third, the Milwaukee Racing Falcon continuing the strong pace it displayed throughout Friday’s running.

Fifth fastest was David Reynolds for Erebus, then Whincup, the BJR duo of Tim Slade and Nick Percat, with Craig Lowndes and Rick Kelly rounding out the ten.

Fabian Coulthard could manage no better than 14th, one place behind lead rookie Richie Stanaway, while Chaz Mostert was 16th and Garth Tander, who didn’t opt for a new tyre run late in the session, was 17th.

The Virgin Australia Supercars Championship  is next on track for the Top 10 Shootout at 1155 local time (1225 AEDT).