Garry Jacobson has broken his Dunlop Super2 Series drought with victory in Race 2 in Adelaide.

Jacobson cleared out from Race 1 winner Paul Dumbrell after a mid-race Safety Car to take his first race win since Phillip Island in April 2017, 16 races ago (including the non-points race at Bathurst).

Dumbrell instead had to look back to stave off Kurt Kostecki, who finished third for the second day in a row.

Jacobson (#26 MW Motorsport Nissan Altima) was slightly slower off the line than Dumbrell (#88 Eggleston Motorsport VF Commodore) but grabbed the lead courtesy of the inside run to Senna Chicane.

Macauley Jones got his #14 Brad Jones Racing VF Commodore hooked up across the nose of Kurt Kostecki (#55 Kostecki Brothers VF Commodore) under brakes for the first corner and dropped to seventh having started fourth.

At the end of Wakefield Street, Will Brown (#38 Eggleston Motosport VF Commodore) lunged past Kurt Kostecki but couldn’t pull up and swiped the tyre belt, conceding a couple of positions.

The top two ran in close quarters until the race was neutralised on Lap 6 as a result of Adam Marjoram coming to grief at Turn 8. 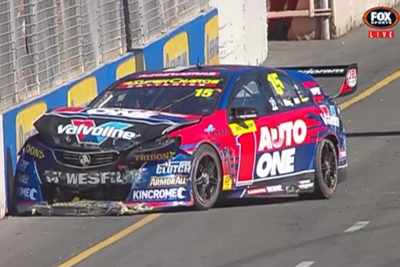 Marjoram appeared to arrive wide of the line in the #15 Image Racing VF Commodore and slapped the outside wall before nosing into the concrete on the opposite side.

Green flags flew for the start of Lap 9, at which time Jacobson began to stretch his advantage.

Kurt Kostecki was soon applying pressure to Dumbrell, who also had to be wary of a bad sportsmanship flag for kerb overuse, but couldn’t manage to pass.

Jacobson’s lead peaked over three seconds as he took out an encounter which ran two laps short of its scheduled 19 due to time-certainty.

He and Dumbrell broke the latter’s year-old lap record before the Safety Car, Jacobson by half a second to hold the new benchmark of 1:21.5173s.

Shae Davies (#67 Paul Morris Motorsport FGX Falcon) ran fourth from partway through the first lap until the finish, having made a good start and inherited positions due to the squabbles around him.

Jones made a slick late move past Brown at Turn 9 on the restart lap to take over fifth position, where he stayed until the end.

Alex Rullo had the save of the race when he gathered up the #62 MW Motorsport Nissan Altima after a hit from Brodie Kostecki at the top of the Wakefield Street braking zone on Lap 13.

Rullo got all crossed up but managed to stay off the wall and keep his car pointing in the right direction, losing three positions at the time.

He dragged the wounded Altima to 19th at the end, last of those on the lead lap, while the incident will go to a post-race investigation.

The final race of the weekend, also scheduled for 19 laps, starts tomorrow at 1305 local time/1335 AEDT.