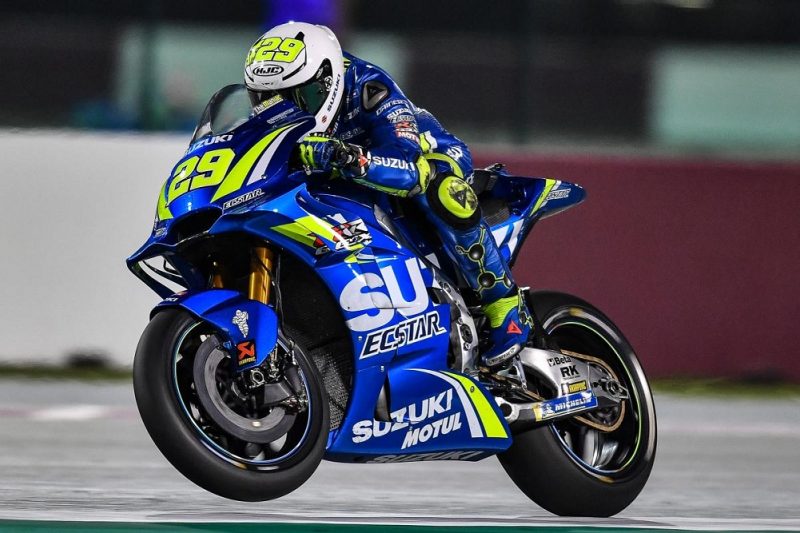 Andrea Iannone has finished on top of Day 2 of MotoGP testing in Qatar thanks to a flyer late in the evening.

Dovizioso took the lead prior to the halfway mark before Iannone, who was third-fastest on the opening day, had his first spell in the lead.

The 2017 world championship runner-up moved back to the front after a red flag period and stayed there until Iannone’s final lap.

Marquez crashed with an hour remaining but subsequently came out to set a time good enough for third-fastest, while Tech3’s Johann Zarco was the fastest of the Yamahas in fourth.

Alex Rins (Suzuki Ecstar) and Cal Crutchlow were fifth and sixth respectively, with Thursday fast man Maverick Viñales (Movistar Yamaha) the last of those on the timesheets to improve on his Day 1 benchmark in seventh.

Pramac Ducati pair Danilo Petrucci and Jack Miller ended up eighth and ninth, both of whom had a hand in causing the red flag when they and Zarco crashed at Turn 1.

The test wraps up with the final day from late tonight (AEDT), during which time there will be 30 minutes of compulsory wet track running to test the feasibility of racing in the rain under lights at the Losail International Circuit.